The U.S.-Mexico border, with all its power, danger, intrigue and excitement is even more complex than most acknowledge. As Gloria Anzaldúa suggested in her seminal work, Borderlands/La Frontera:

The U.S.-Mexican border es un herida abierta [an open wound] where the Third World grates against the first and bleeds. And before a scab forms it hemorrhages again, the lifeblood of two worlds merging to form a third country – a border culture… A border is a dividing line, a narrow strip along a steep edge. A border is a vague and undetermined place created by the emotional residue of an unnatural boundary.

Anzaldúa focuses on the U.S.-Mexico border, while Salman Rushdie emphasizes figurative, more than literal, borders in Step Across This Line, “there are frontiers which, being invisible, are more dangerous to cross than the physical kind.” Rushdie, an international figure who spent nearly a decade in his own “borderlands” existence, provides a unique perspective on the role of frontiers, as he calls them. Step Across This Line, his 2002 Yale University Tanner Lecture on Human Values, travels the globe and the centuries to try to make sense of lines, frontiers, and borders and the peoples who traverse them in the early twenty-first century. Consider Rushdie’s analysis of this photograph: 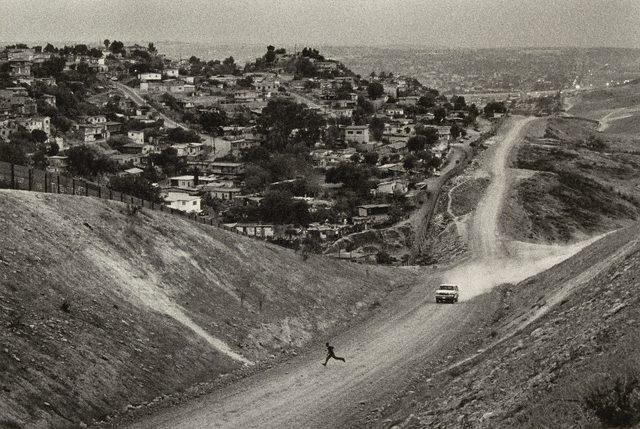 There is a photograph by Sebastião Salgado that shows the wall between the United States and Mexico snaking over the crests of hills, running away into the distance, as far as the eye can see, part Great Wall of China, part gulag. There is a kind of brutal beauty here, the beauty of starkness.

Give the photo a second or third or fourth glance before continuing. Which side is the United States? How do you know? What kind of activity do you see? What kind of lives do you imagine are lived on either side of the wall? Rushdie continues,

At intervals along the wall there are watchtowers, and these so-called sky-towers are manned by armed men. In the photograph we can see the tiny, silhouetted figure of a running man, an illegal immigrant, being chased by other men in cars. The strange thing about the picture is that, although the running man is clearly on the American side, he is running toward the wall, not away from it. He has been spotted, and is more afraid of the men bearing down on him in cars than of the impoverished life he thought he had left behind. He is trying to get back, to unmake his bid for freedom.

Rushdie’s turn of phrase is striking. The idea of “unmaking” one’s “bid for freedom” counters our traditional casting of the United States as the land of the free.

So freedom is now to be defined against those too poor to deserve its benefits by the edifices and procedures of totalitarianism. What kind of freedom is it, then, that we enjoy in the countries of the West – those exclusive, increasingly well-guarded enclaves of ours? That is the question the photograph asks, and before September 11, 2001, many of us – many more, I suspect, than today – would have been on the running man’s side.

This prescient vision, a decade ago, came to be: the border in the post-9/11 world has been directly tied to terrorism, despite our knowledge that none of those who struck on 9/11 entered through Mexico. In fact, the alliance between the United States and Mexico that was being strengthened by Presidents George W. Bush and Vicente Fox in the days immediately prior to 9/11, disintegrated. The spirit of opportunity and cooperation between these neighbors evaporated in the aftermath  of the attacks on the United States.

You may also enjoy this author’s blog post: Borderlands Business

In the meantime, you may enjoy these resources:

Migrations.
A photo essay on world migration by Sebastião Salgado (1997)

Corruption at the Gates
Two-part series from NPR’s All Things Considered, which examines the culture of drug money and corruption along the US-Mexico border.

The Forgotten Americans
PBS documentary about the people who live in Las Colonias, shanty towns and rural communities within 150 miles of the US – Mexico Border.

Latin American Network Information Center
“LANIC’s mission is to facilitate access to Internet-based information to, from, or on Latin America. While many of our resources are designed to facilitate research and academic endeavors, our site has also become an important gateway to Latin America for primary and secondary school teachers and students, private and public sector professionals, and just about anyone looking for important information about this public region.”