September 23, 2015, marked a historic day in Colombian history. President Juan Manuel Santos and Timoléon Jiménez, leader of the Revolutionary Armed Forces of Colombia-People´s Army (FARC-EP), agreed to sign a peace treaty. Concluding negotiations that started in 2012, the two leaders will sign the treaty on March 23, 2016, ending sixty years of armed conflict. Questions will now be raised about the need to offer reparations to the victims of the violence and how the country can move forward after a civil war that has killed hundreds of thousands of people.

This healing process has already started in some parts of Colombia in the form of several grassroots movements and state-led initiatives. Since the early 2000s, different communities across the nation located in both urban and rural environments began to create spaces where they could grieve and mourn the loss of their loved ones. These memory sites allow different communities a space to represent their specific experiences of the violence and make sense of their collective trauma. They also offer the country as a whole a series of strategies to help heal, now that peace is on the horizon.

One example is The Center for Memory, Peace, and Reconciliation (Centro de Memoria, Paz y Reconciliación), founded in 2012. It was created as the result of discussions of Human Rights NGOs and peace organizations that started in 2008. The Center is an inclusive and participatory space, where survivors of violence can participate in constructing their public historical memories. The main structure of the Center is the Memorial for Life, which is a wall built for remembering casualties of the armed conflict. The architects promoted a participatory process where the survivors of atrocities could bring, as a symbolic gesture, a handful of soil dedicated to the victims. The soil symbolized the source of the armed conflict in struggles over landowning but also represented something that belongs to everybody. They wanted people to feel part of the initiative for peace that the Center promotes. Therefore, the wall represents the dead, memory, and the future. 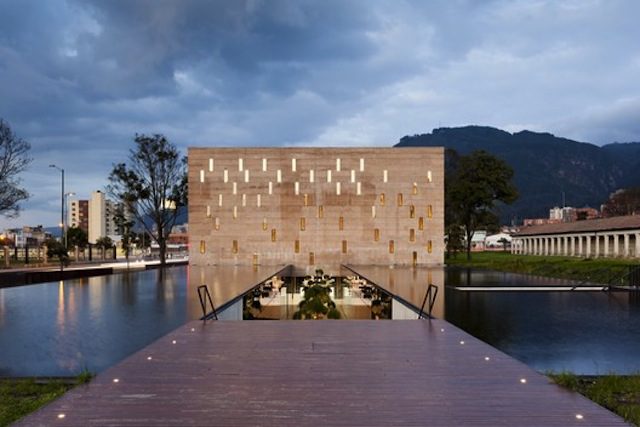 The Center for Memory, Peace, and Reconciliation, Colombia.

The Center´s intention is to promote commemoration that is meaningful to the local population, rather than to perpetuate an official state narrative. For example, the coordinators of the Center have organized exhibits related to the extermination of the political party, The Patriotic Union (Unión Patriótica). The UP was the target of political violence from drug lords, paramilitaries, and agents of the security forces during the mid-1980s, leading to its disappearance. The Center also organized an important exhibit called “Exhibition of the Mothers of Soacha,” in which a group of mothers claimed justice for the assassination of their sons. In 2008, some members of the National Army killed civilians, claiming they were guerrilla fighters. During the last months of that year, approximately 19 corpses of young men appeared in Norte de Santander, a region bordering Venezuela in the north, but officials from Soacha, a city on the southern edge of Bogotá, were able to establish they had been recruited as workers and then appeared dead far away from their home. Since then, the so-called Mothers of Soacha have been threatened, harassed, and kept under surveillance due to their efforts to commemorate their sons.

Now, as Colombia seeks to achieve a lasting peace, these efforts of commemoration and memory in local communities, NGOs, cultural organizations, and the state need to come together to begin a project of national reflection that includes every individual effected by the violence. 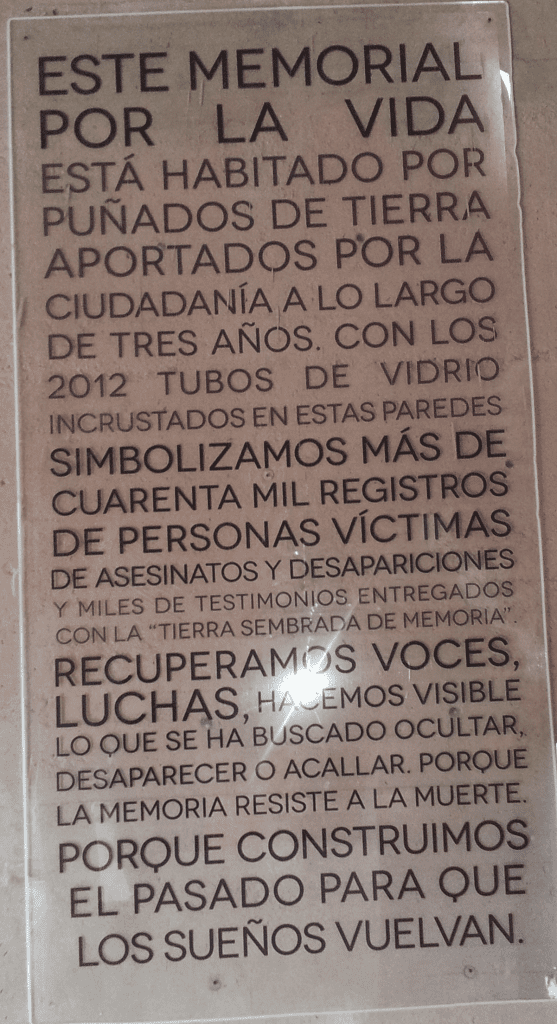 Plaque describing the memorial, which reads “This Memorial for Life is inhabited by handfuls of soil that citizens brought during three years. They are kept in 2012 glass tubes embedded in the walls of the building. They symbolize more than 40,000 records of victims of murders and disappearances and thousands of stories of violence. We recover voices, we make visible what has been hidden or silenced because memory resists death. We create the past so dreams can return.” Courtesy of the author.

And other posts in our series featuring history museums