Kicking off our new series on digital history projects, Dr. Vladislav Beronja, a professor in the UT Department of Slavic and Eurasian Studies, tells us about a class project to build a website on Balkan pop music.

Turbo-folk—a mixture of pounding electronic beats and trilled vocals—can be heard blasting from cafés, taxis, and dance clubs across the former Yugoslavia. Despite its ubiquity in the region, this Balkan pop phenomenon has been a hotspot of political and cultural controversy due to historical associations with Slobodan Milosevic’s nationalist regime in Serbia of the 1990s. The genre has been accused of valorizing patriarchal values, crass materialism, gangster lifestyle, and—more seriously—war crimes. A closer look at turbo-folk, however, reveals that it has undergone significant transformations in the last few decades.

This spring my students examined turbo-folk as well as the accompanying controversies in the context of an undergraduate seminar, “Punks and Divas in Southeastern Europe: Popular Music and Cultural Identity in the Balkans.” The result is a website titled Old Beats, New Verses: 21 Newly Composed Essays on Turbo-folk, which the class collectively created with help from the European Studies Librarian, Ian Goodale. 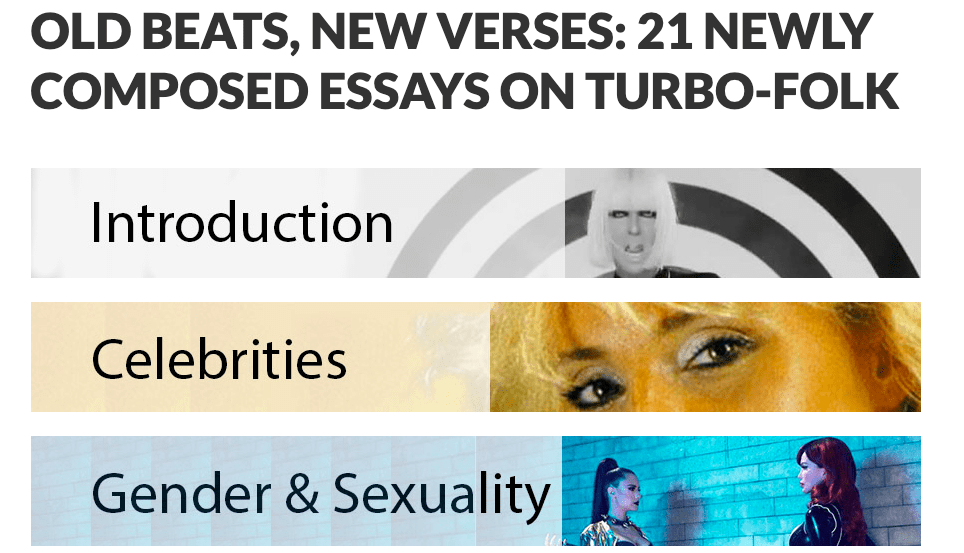 In many ways, “Old Beats, New Verses” is a companion piece to a similar website on punk music, “Yugoslav Punk,” the soundtrack of the last Yugoslav generation characterized by playful rebellion, liberal orientation, and irony typical of late socialism. Turbo-folk, on the other hand, represents for many the soundtrack to Serbian militant nationalism, which stoked the flames of war that ultimately engulfed and destroyed multiethnic Yugoslavia in the early 1990s. Drawing on recent scholarship and the wealth of materials available on the Internet, the student essays address different aspects of turbo-folk, from its most prominent divas to representations of gender and national identity to global influences. Many if not all of the contributions challenge the assumptions and stereotypes connected to turbo-folk while still maintaining a critical outlook.

Turbo-folk stands at the complex intersection of the various highly politicized identities in the former Yugoslavia, such as nationality, gender, sexuality, and class. This complex cultural location has been the case from the genre’s inception in newly composed folk or neofolk music.  Emerging in 1960s Yugoslavia, neofolk coincided with rapid industrialization and expansion of the urban working class in the fledgling socialist state. The new-fangled genre combined elements of Balkan folk music, strongly inflected by Ottoman colonial legacy in the region, with western pop structures and modern electric instruments. Like its primary audience of recently urbanized peasants, neofolk was almost immediately received with ridicule and scorn by the Yugoslav cultural establishment, even as the communist authorities continued to strategically utilize the genre’s wide appeal. Frequently derided as overly crass, kitschy, and even foreign, neofolk nevertheless occupied a dominant position in Yugoslav socialist culture as its unacknowledged pleasure-filled underbelly.

Reflecting on this history, many student contributions examine the afterlife of neofolk—and of Yugoslavia—in contemporary turbo-folk. The career of Lepa Brena, the neofolk singer who rose to spectacular fame in the early 1980s, is especially interesting in this respect. Several students examine Brena’s music as a vehicle of contemporary Yugonostalgia—a collective longing for the former socialist homeland that is often mediated through music, cinema, and other products of pop culture. Born into a Bosnian Muslim family, but a longtime resident of Belgrade and married to a Serb, Brena in many ways breaks the stereotype of both the neofolk/turbo-folk performers and audiences as overly nationalistic. Moreover, positive references to socialist Yugoslavia in contemporary turbo-folk, as well as the genre’s popularity across national lines have arguably made it an expression of “identity beyond borders,” as one student essay puts it.

If neofolk is representative of socialist Yugoslavia (and its contradictions), then turbo-folk has become symbolic of its violent dissolution. In the 1990s, turbo-folk became an extension of Slobodan Milosevic’s authoritarian regime in Serbia, when the genre flooded the airwaves, pushing out any oppositional musical voices and subcultures. In this vein, the category of “kitsch” has been widely applied to turbo-folk to describe its aesthetically and politically regressive qualities. Offering a creative reading of Viki Miljković’s 1994 hit “Coca Cola, Marlboro, Suzuki,” an essay by Luis Martinez shows how the kitschy, commodity-filled surfaces of turbo-folk music videos should not be seen as mere escapism, but as unwitting mediators of traumatic and perplexing historical changes in the region.

Since the 1990s, the genre has become largely autonomous from regime politics, although the controversies around turbo-folk divas and their fans continue to linger. Many essays demonstrate that turbo-folk has significantly evolved in the 21st century by reflecting more socially progressive themes. For instance, the genre has started incorporating proto-feminist values and queer aesthetics. An essay by McKenna Gessner argues that contemporary turbo-folk divas challenge normative ideas of femininity and female sexuality. The essay draws examples from Jelena Karleuša and Nikolija’s music videos, featuring dramatic reversals of gendered power dynamics and outrageous “femme” looks. Other contributions are less celebratory, such as Gabriella Velasco’s essay on queer embodiment (or the lack thereof) in turbo-folk. All the essays, however, acknowledge that the nods and winks of turbo-folk divas to their female and queer audiences have become more open and explicit, despite the continued presence of patriarchal and homophobic attitudes in Balkan societies.

The section on turbo-folk and cultural and national identity is the most extensive, and for good reason. Like identity in the Balkans, turbo-folk has always been full of ambiguities and contradictions, which makes it a fascinating object of study. For instance, the influence of Ottoman colonial legacy on contemporary Balkan popular music still remains largely unacknowledged even when it is playfully evoked. Turbo-folk not only adopts Orientalist melodies and themes, but it blatantly copies pop songs from Turkey and the Middle East, simply translating the original texts to bring them closer to former Yugoslav audiences. As Milena Đorđević-Kisačanin’s essay shows, Serbian turbo-folk singers will frequently borrow from Greek pop music to escape charges of “Turkishness.” The same is true of the wider appropriations of Romani music. Roma culture is used to symbolize the unfettered spirit of the Balkans as a whole, even as the Roma themselves remain one of the most marginalized and oppressed group in the region.

The student enthusiasm and the consistently high quality of research during this project have convinced me of the advantages of doing a collective assignment with a strong digital and public-facing component.  Together these student essays show the value of intercultural contact, original research, and guided on-line engagement in an undergraduate seminar setting. They also successfully break the surface of the stereotypes of Balkan popular culture to reveal a more complex, layered, and historical image of the region. In this sense, the project can perform the critical work of scholarship beyond the university classroom.

“London is Drowning and I, I Live by the River”: The Clash’s London Calling at 40