by Julia Gossard and Shaherzad Ahmadi

The Symposium on Gender, History, and Sexuality has been a fixture in the Department of History at The University of Texas since 2002, offering a forum for graduate students and faculty to present papers and works-in-progress for discussion in a relaxed and collegial atmosphere.

This year, Not Even Past will be providing a summary of the presentations and a list of further reading on their subjects. We will also be live tweeting the presentations on our Twitter feed.  For a schedule of Fall 2013 events see their page on the History website.

The Gender Symposium kicked off the Fall semester with a roundtable discussion on Friday, September 13, entitled, “Historicizing Women’s Bodies as Political Platforms and Agendas.”  Inspired by the recent Texas bills restricting abortion and Wendy Davis’s filibuster opposing those bills, the roundtable provided a historical context for the use of women’s bodies as political platforms and agendas.  The politicization of women’s bodies and reproductive issues has been a permanent fixture in US history, and they have been at the forefront of state and social concerns throughout history in other parts of the world as well.  For example, Chinese women in the Tang dynasty had their feet bound in a literal physical subjugation; Early Modern European coverture laws made women the physical property of their husbands or fathers; and minority women were forcibly sterilized in twentieth-century America.  Roundtable presenters included History graduate students Luritta Dubois and Jessica Luther. Professor Lisa Moore of the UT English Department and Interim Director of the Center for Women’s and Gender Studies provided commentary and a reading of her poem, “Cowgirl Filibuster.” 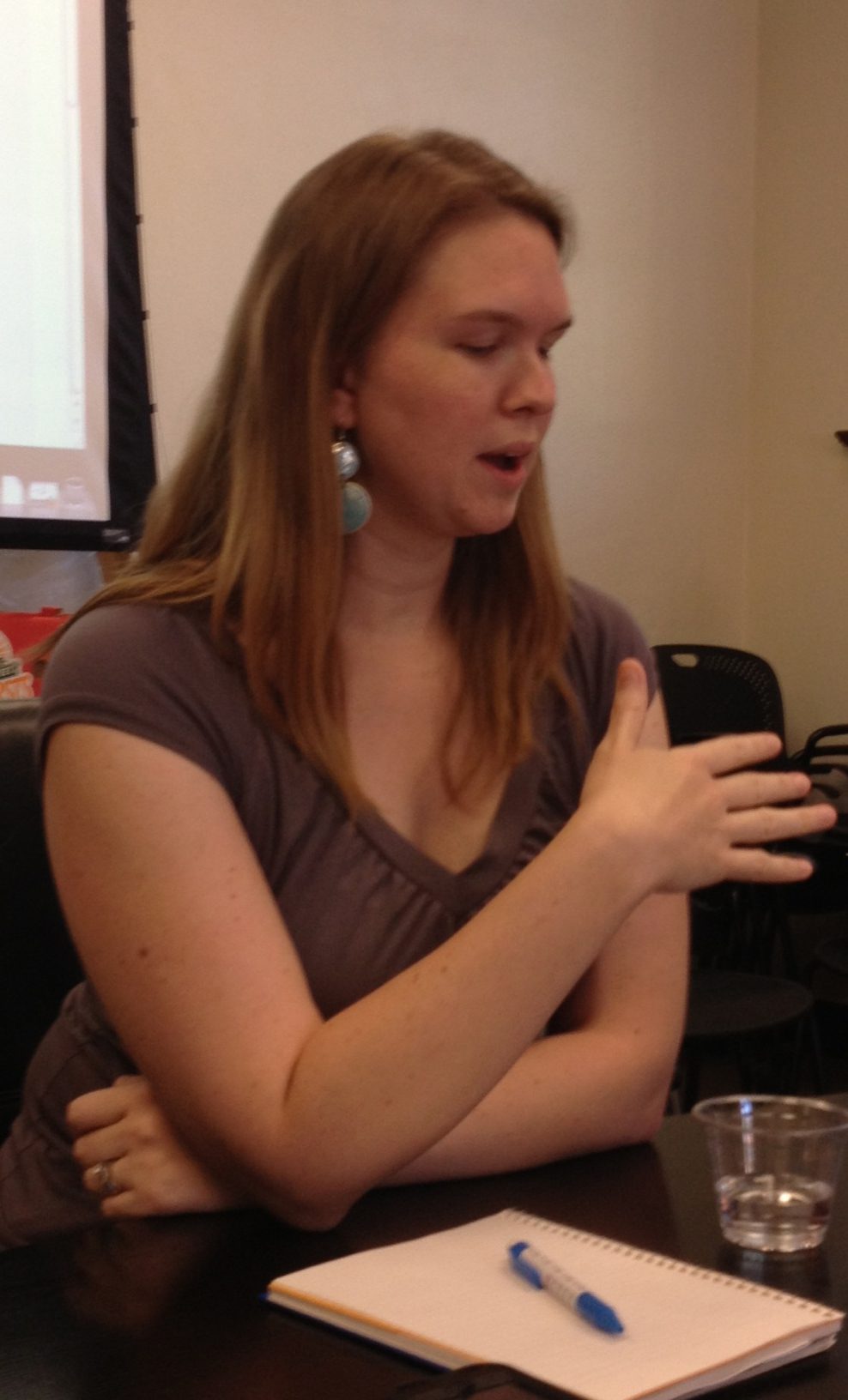 The roundtable began with Jessica Luther discussing her activism as part of the “Orange Shirts” movement during the summer of 2013.  Luther was present at Democratic Congresswoman Wendy Davis’s filibuster and commented that it represented a particular moment of history “in the making.”  With the use of social media, Luther was able to connect globally to those desperate for news “from the Capitol floor.”  Her activism and role in “creating” history this summer coincides with her dissertation that examines the English empire, slavery, and the history of the body in Barbados.  Women’s bodies, Luther argued, represent sites over which politicians attempt to exert control. Where some contemporary social commentators are surprised at the attention to abortion rights during an economic recession and politically divided period, Jessica said this is exactly what one would expect during times of crisis if one examines the historical record. 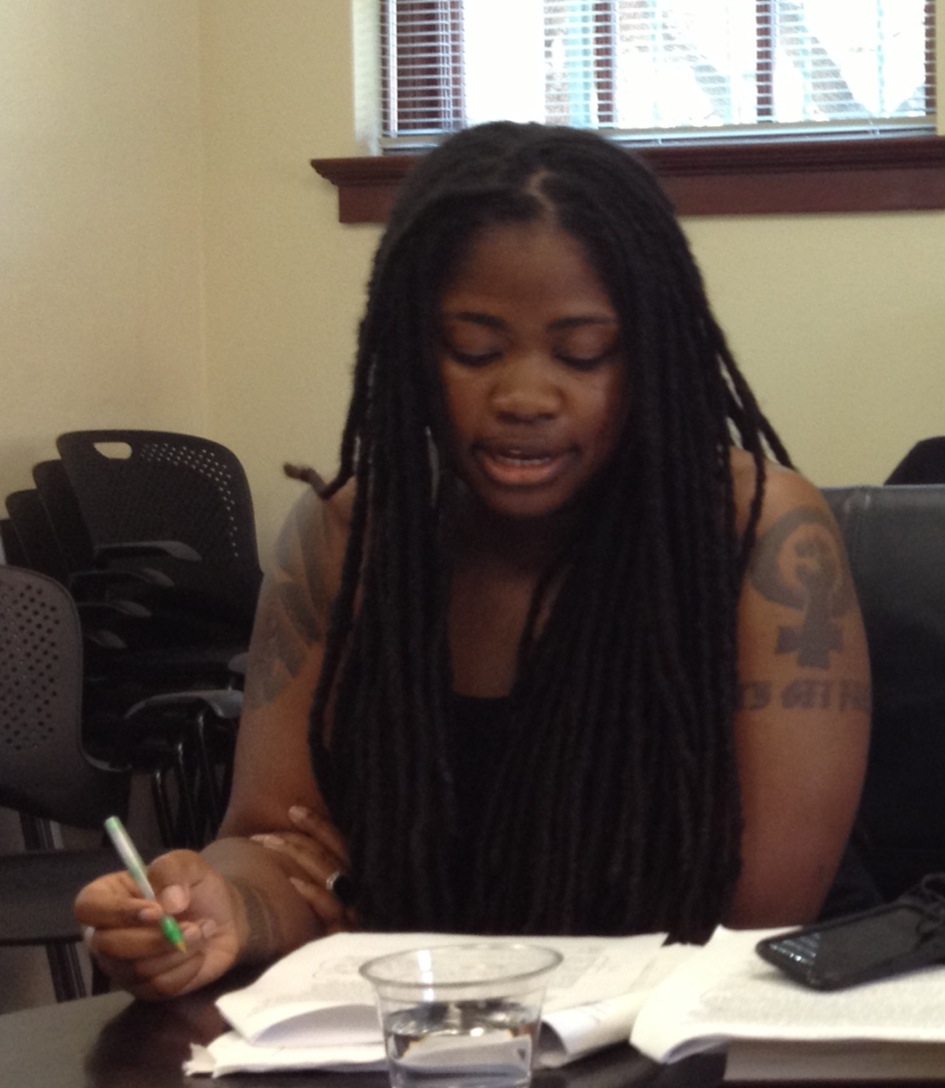 Luritta Dubois shifted the discussion to the shared and complicated history of the forced sterilization of Chicana and Black women in twentieth-century Texas.  The Black Liberation Movement saw women’s bodies as vessels through which new generations of black citizens would be born and women as this new generation’s mothers who could teach their children the ideals of black citizenship.  Therefore, leaders like Malcolm X disapproved of contraception.  Seeing this as a way to undermine minority groups’ power, the state not only made contraception available but also, under the auspices of programs such as Medicaid, American doctors sterilized 100,000-150,000 minority women – both black and Chicana – in the 1970s. Therefore, as Dubois’s project examines, women’s bodies and their reproductive capabilities were truly at the forefront of Texas politics; again proving the current issues in Texas are part of a larger trend in using women’s bodies to further political agendas. 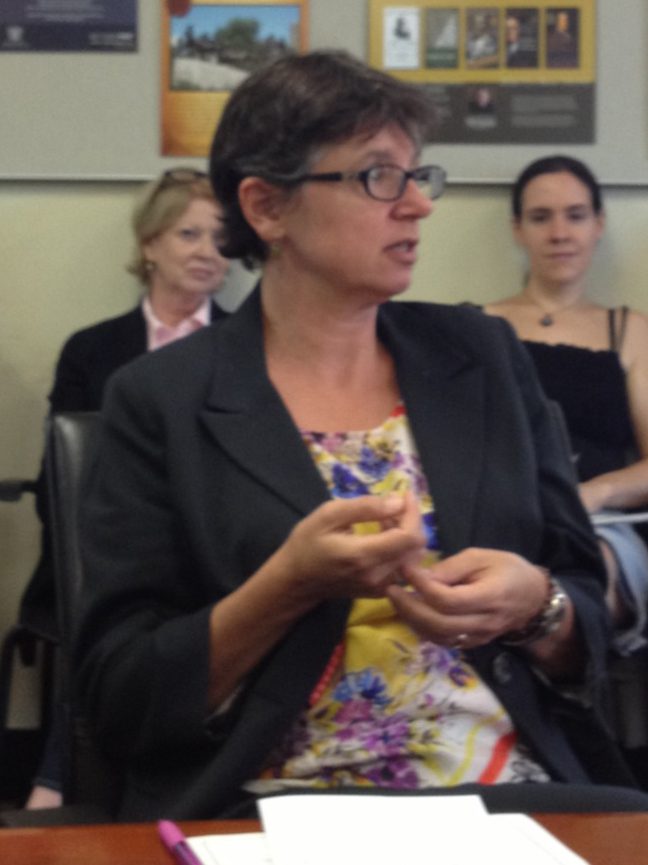 Lisa Moore concluded the presentation by describing her own experience with the filibuster while away in California, where she followed Luther on Twitter, agreeing that this truly was “history in the making” and that these issues resonate throughout time across regional and cultural planes. Explaining that poets historically served as political commentators for the public, Dr. Moore read her poem, “Cowgirl Filibuster,” which was inspired by Texas battle over the anti-abortion bill and by Wendy Davis.

Madge kept our boys, the fruit of pregnancies

I loved, up late to watch the live feed

from the Capitol. Elated, they Minecrafted

fireworks: “We Stand With Texas Women.”

Word had gotten out about the bill.

drove all night to Austin to explain:

out of the neighborhoods. Seven hundred

by mid-afternoon. Story after

story for the record: citizen

don’t ever have the votes to win a thing.

Their only hope is filibuster, so,

Senator from Fort Worth, once-teenage mom,

tying on her snappy pink Mizuno

running shoes beneath her power suit

no food nor water, bathroom break, no “comfort

the ruled-out stories. Women with too many

mouths to feed already. One whose longed-

-for pregnancy became a fetus that

could not survive its birth. Middle schoolers.

Men remembering a sister’s or

And many, many women pregnant

by someone who had raped them, hurt their kids.

by now, flow down the steps into the night.

At last, Republicans shut Wendy up.

They cite the rules to break them. Senator

funeral, is ignored. Quarter to midnight.

“When,” she asks the Speaker’s turning head,

“when may a female senator receive

recognition from her male colleagues?”

Grannies are dragged out. Minutes go by.

and Wendy Davis takes a drink and pees.

I thought of Brittney, at fourteen, who begged

me not to tell her mom, said “Seventeen,

that’s different, old enough to have a kid.”

Of Karen. When we both were seventeen

in Canada, your parent’s permission.

We told them we were going skiing,

drove to Montana, skis strapped to the car,

a teenage girl can’t get that in Montana.

During the open discussion that followed, many more examples of the use of women’s bodies and reproductive issues as political platforms and agendas came to light and provided thought provoking questions.  At the end of our discussion, the presenters and audience members agreed that the efforts of Congresswoman Wendy Davis, while extremely important, represent only one particular moment in the long history of the political use of women’s bodies as sites of control and subjugation. Historicizing the filibuster of the summer of 2013 allows us insight into one the most important political issues of our time.

Dan Solomon’s recap of filibuster night, “A Victory By the People,” The Austin Chronicle

Elijah Muhammad, Message to the Blackman in America (1965)

Dorothy Roberts, Killing the Black Body: Race, Reproduction, and the Meaning of Liberty (1997)

History of the Body