In his introduction to Confederates in the Attic, the Pulitzer Prize-winning author Tony Horwitz recounts the very strange moment when his weekend sleep-in was rudely interrupted by the loud cracking of gunfire. 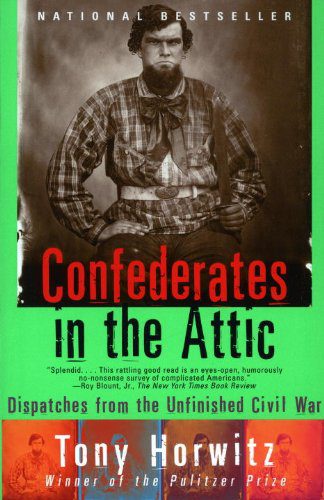 The noise came from an unexpected Civil War re-enactment being filmed outside of his bedroom window.  Horwitz had once been a little boy who would spend hours engrossed in an old, enormous book of Civil War sketches, captivated by images of Yankee and Dixie soldiers engaged in battle.  But despite spending a number of years working as a war correspondent, it was this surprise encounter with the “men in grey” that prompted Horwitz to turn the critical gaze of the journalist upon his own and his country’s enduring fascination with the bloody conflict that pitted American against American in 1861-1865.

Confederates in the Attic is an informative and entertaining record of the extended road trip that Horwitz made through the Confederate heartland of the United States to investigate how Americans and southerners in particular continue to remember the war, and to make sense of that strange and enduring Confederate pride.  Along the way Hortwitz gets to know a number of interesting people.  His exchanges with Civil War enthusiasts from all walks of life spur the narrative along.  They include the famous Civil War Historian Shelby Foote, female members of the Daughters of the Confederacy who devote considerable effort to finding Dixie soldiers in family trees, and bands of modern day “hardcore” Civil War re-enactors; factory workers who devote much of their free time and money to re-living as authentically as possible the experiences of nineteenth-century Confederate soldiers.  For these rough and ready men who are perhaps the most interesting Horwitz introduces us to, this means sewing their own Civil War uniforms, dressing up to march for miles through wild country in ill-fitting boots, and spending nights in open, near-freezing conditions under thin blankets, spooning together for warmth.

Of course race cannot be left out of a book about the Civil War past or present. Horwitz does not meet one Civil War-obsessed African American in his travels.  He concludes through his many conversations with white southerners who cherish the memory of the Confederacy that slavery has been conveniently forgotten in popular conceptions of why the South ceded from the Union and went to war against it.  Horwitz provides a sobering account of the role the Civil War plays in modern racial violence; how in 1995 the ostentatious display of the confederate flag could lead one young man to kill another young man, and how the Klan is never really far away.

Horwitz demonstrates that the Civil War is very much still alive in the imaginations of Americans and shapes the way in which many perceive themselves and the world they live in.  Confederates in the Attic is a must read for anyone studying the US Civil War and modern US history, or history and memory.  It is a wonderful resource for teachers who want to get their students excited about this history and its continued influence on the present.  It is truly a delight to read and would make a perfect gift for anyone who enjoys history.

You may also enjoy hearing UT professor of History Jacqueline Jones read from her book “Saving Savannah: The City and the Civil War.”