On March 21, 1861, Alexander Stephens, the vice president of the Confederate States of America, delivered an extemporaneous speech to an enthusiastic crowd in Savannah, Georgia. Stephens declared that new nation had been created in order to refute the idea enshrined in the Declaration of Independence that “All men are created equal.” According to Stephens, “Our new government is founded upon exactly the opposite idea; its foundations are laid, its corner-stone rests, upon the great truth that the negro is not equal to the white man; that slavery subordination to the superior race is his natural and moral condition.” Four years later the Confederacy lay in ruins, and nearly 700,000 Americans lay dead. Three and a half million black Southerners were celebrating their release from bondage. Intending to preserve the institution of slavery, secessionists had started a war that destroyed the very way of life they had set out to defend. 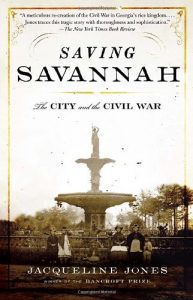 Saving Savannah chronicles the wholly unanticipated consequences of the Civil War for Confederate slaveholders and the dramatic efforts of the city’s black people to live life on their own terms. In 1860 Savannah was a lively river port of 22,000 (people of color made up 40 percent of the population), processing and shipping rice, cotton, and lumber to the North and to Europe. Visitors enjoyed the balmy winters and marveled at the city’s charming, leafy squares and its elegant brick and pink-stucco mansions. Frequent, elaborate parades and processions displayed a social order based on the power of whites over blacks, rich over poor, men over women, native-born over immigrant. City fathers tried to enforce white/black, free/slave divisions, but often failed. A small number of wealthy merchants, lawyers, and bankers managed to convince a large number of white dockworkers (many of them Irish immigrants) that the Democratic Party represented the interests of all white men regardless of class or ethnic background. At the same time, the city’s commercial economy also depended on the labor of black men, enslaved and freed, who hauled staples from the railroad depot to the processing mill and then to the wharves. The fact of the matter was that black and poor-white workers shared lowly material conditions. Together, black and white men and women of the laboring classes ate, slept, drank, danced, and fought with each other in the “disorderly” parts of town and together they ran an underground economy fueled by resourceful men and women who trafficked in goods stolen from their social betters. 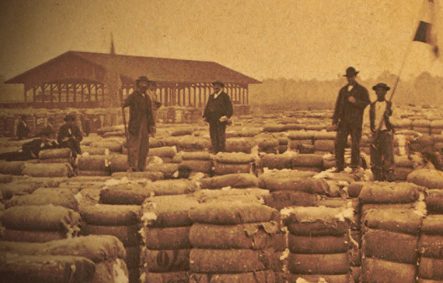 The black community was remarkably well-organized. Black education was illegal; but each morning some enslaved children hurried through the streets, their primers wrapped in paper and tucked away in lunch pails, on their way to schools operated secretly by black teachers. Men and women belonged to mutual-aid and burial associations, secret societies in the West African tradition. Moreover, the community openly supported their own churches where ministers preached a subversive message to their congregants each Sunday. Invoking a creed of universal Christian brotherhood, the Reverend Andrew Marshall, pastor of First African Baptist Church, demanded to know, “How many of those to whom we are subject in the flesh have recognized our common Master in Heaven, and they are our masters no longer?” Savannah whites were convinced that their systems of social control would keep all blacks, enslaved and free, in their “place”; but they were wrong.

The onset of military hostilities in April 1861 caused an immediate disruption to Savannah’s prosperity and its pretenses of a well-ordered hierarchy. Trade came to an abrupt halt, and many white workers lost their jobs. Irish immigrants who had come south from New York for the busy season (November to May) packed up and went home. An influx of Confederate soldiers—up to 9,000 at one point—overtaxed the city’s natural and law-enforcement resources. Soldiers of modest backgrounds deployed up and down the Georgia coast endured sweltering summers, tormented by mosquitoes and sandflies. They resented the officers who brought their personal cooks and valets to camp and returned to Savannah periodically to take a hot bath or attend a party. Laboring men were less than enthusiastic conscripts into the Confederate army. By early 1863 the local papers were running advertisements for army deserters—listing their age, height, and distinguishing physical characteristics– where ads for fugitive slaves had been posted before the war. The antebellum class consensus among the city’s elites faltered, as even well-off Jews became the targets of anti-Semitic attacks. Even the wealthiest Savannahians were not immune to wartime dislocations: the Chicago-born Nelly Kinzie Gordon, married to a scion of one of Savannah’s most distinguished families, endured the scorn of her neighbors when they learned that several of her kinsmen, including her uncle General David Hunter, were serving in the Union army and stationed in coastal waters not far from the city. In the spring of 1864, poor white women staged a downtown bread riot; their anger and frustration highlighted the sufferings of many in the city scrounging for work—and for food.

Meanwhile, black people emerged as a subversive force within the heart of the Confederacy. Some men served as pilots, scouts and spies for Union forces, helping gunboats to navigate through the intricate lattice-work of coastal waterways. Other men, beginning in 1862, joined the Union army and navy. Some Savannah blacks fled to Federal lines, while others remained behind and made money supplying Confederate army camps. One butcher, Jackson Sheftall, profited handsomely, and in 1862 paid $2600 to free his wife Elizabeth. Labor-hungry Confederate officials charged with constructing fortifications soon found that they needed to pay cash wages to men and women of color regardless of whether they were slaves or free. Cooks and domestics worked slowly and grudgingly, if at all. Church members defied city authorities and sang praise-hymns to freedom. The institution of slavery was crumbling at lightning speed and black people themselves were hastening its demise.

Although the Confederacy died in April, 1865, the Confederate project premised on white supremacy did not. In late 1864 Union General William Tecumseh Sherman spared the city from destruction, and in an effort to restore public “order,” he even allowed the mayor and members of the city council to remain in office. Over the next few years, Union military officials, federal Freedmen’s Bureau agents, and representatives of northern missionary associations would join with white politicians, police, and employers to stall black people’s struggles for autonomy and self-determination. Most whites, whether northern or southern, believed that black people were not really working unless they worked under the supervision of a white person, in the fields or in a kitchen. These whites frowned upon freed men and women who attempted to run their own schools and farm their own land, separate from their former masters and mistresses. 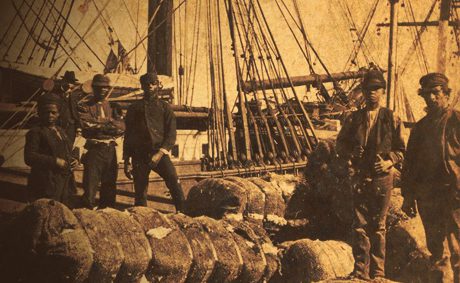 After the war, black leaders emerged to offer diverse—and at times conflicting—strategies for political empowerment. Particularly outspoken individuals included James Simms, carpenter, preacher, labor organizer, and principled integrationist determined to win for blacks full citizenship rights; and Aaron A. Bradley, a militant lawyer and professional provocateur bent on championing the interests of black laborers in the cotton and rice fields. Tunis G. Campbell and Ulysses L. Houston favored self-sufficient black colonies as the way toward collective autonomy. The Reverend Garrison Frazier stressed the significance of landownership, but he also counseled accommodation to the white powers-that-be. Richard W. White, a Union army veteran inclined toward poetry, confounded whites because he looked white; he was the subject of an 1869 court case where his “race” was in dispute. City officials were trying to prevent all black men from running for office; in order to reestablish the antebellum order, they needed first to identify who was “white” and who was “black.” Yet ironically these “racial” distinctions did not always depend on the color of a person’s skin. With the exception of Frazier, all of these men occupied public office briefly, until local whites celebrated the departure of Union occupation forces by suppressing and eventually eliminating the black vote via a poll tax and election-day violence. By the early 1870s, in Savannah and along the Georgia coast, few freedmen were allowed to vote and none served on juries, the city council, or the police force. The outlines of the Confederate project would survive for the next hundred years.

Jacqueline Jones, Saving Savannah: The City and the Civil War