On the same day the President of the United States announced that he was ending DACA (the program that provides some immigrants who were brought to the US as minors protection from deportation and eligibility for a work permit), this moving essay appeared on the Russian History Blog, which we re-post with their permission. In the context of our IHS annual theme and our film series on the FACES OF MIGRATION, this story offers a cautionary tale on bureaucracy and vulnerability. ~Joan Neuberger

The Failures of Arbitrary Mercy

On October 26, Iuliia and Luiza Ruprekht, the first 71, and the second 67 years old, German subjects who lived in Gatchina and were subject to deportation due to the war, gave the Gatchina police chief a petition in which they asked to be allowed to remain in their place of residence in Russia, where they were born and had lived all their lives, and referring to their elderly years, illness, and material dependence on their sister, a Russian subject living in Petrograd. [The police chief] presented this petition to the Petrograd governor only after thirteen days, that is on November 8, with а favorable conclusion, due to which [the governor] placed a decision favorable to the petitioners on the report. But not waiting for notice of [the resolution of their petition], the aforementioned foreigners on November 9 ended their lives with suicide, having hanged themselves in their apartment; the reason for their suicide, according to the same police chief, was that they were dejected under the influence of the threat of the possibility of being sent, as German subjects, out of Russia. The police chief’s explanation of why there was such a delay in presenting the late Ruprekhts’ petition to the Petrograd governor does not hold up.

Where to begin? Well, there’s a horrible irony here, because the other actors were hardly themselves all Russians, even if they were all Russian subjects. The police chief’s name was Kavtaradze; the Minister of the Imperial Court’s name was Frederiks, the Petrograd governor’s name Adlerberg. The officials of imperial Russia were of its empire, not all of Russia. I could go on about the unfairness of former non-Russians turning on current non-Russians, particularly current non-Russians who had lived their whole lives in Russia, except that I think that’s not really the story here.

Let’s start instead with the specifics of the file itself. This letter comes at the end of a long file “with confidential correspondence on various questions,” the same file that had the many lists of foreigners that I mentioned in my last post. The reason for this letter being there was due not to the fact that it involved “foreigners” but instead to the fact that it involved criticizing the police. The Minister of the Interior, who had oversight over the governor, was writing to the Minister of the Imperial Court, who had oversight over the Gatchina authorities, because he was casting blame for this suicide on the Gatchina police chief. A number of the other issues that show up in this file also involve cases in which police officials are found guilty of some bad act—wrongdoing by the police had to be kept secret. So that means that this outcome was seen as a very bad thing, and that there was real worry that the police chief had failed to carry out his important duty of dealing with petitions. 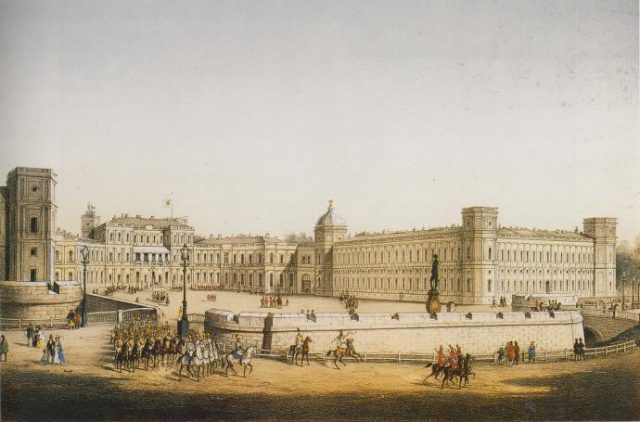 The royal palace at Gatchina. Lithograph by K.K.Schultz from the drawing by I.I.Charlemagne, mid-19c. (Saint Petersburg Encyclopedia)

The Gatchina authorities investigated the incident, and believed that the police chief was innocent of any wrongdoing—if anything, they blamed the Petrograd governor’s office. According to their investigation, the two sisters had received notice that they were to be kicked out of Russia, much to their shock (after all, that’s where they’d been born), and decided to travel straight to Petrograd to petition the governor directly. Once they got there, however, they were told they had to follow the normal chain of command, which meant turning first to the Gatchina authorities. Only those authorities could then forward their petition to Petrograd. When the sisters returned to Gatchina, still upset, they went to see the police chief to make their petition. He was surprised that they had been sent notice of their deportation, because he had thought the lists of foreigners were in the process of being corrected and that their names oughtn’t to have appeared on it anyway (he apparently considered them non-foreigners even if they’d never formally taken on Russian subjecthood). He also advised them to get a letter from a doctor to bolster their claim of ill health. Once they got such a letter, he forwarded the petition, but before any response could come, the women were so overcome by the set of events that their fear took over.

Perhaps in part because I am a woman living and working in a country where I do not have citizenship, I find this story almost unbearable. Had Iuliia and Luiza’s father taken Russian subjecthood, they wouldn’t have had a problem. Had they married Russian subjects, they wouldn’t have had a problem. Instead, most likely, no one had ever really noticed that these two maiden ladies weren’t Russian subjects. They don’t show up on the lists of foreigners, probably because they were women, and the lists almost always only include men. They just lived their lives until suddenly their citizenship became meaningful in a most awful way. What must that have felt like? Well, we have the answer. It felt hopeless.

Even sadder is that clearly no one expected it to turn out this way. No one even expected them to be deported. The governor was going to grant their petition; the police chief supported them in their efforts, and gave them suggestions for how to make their case stronger. That goes back to the idea that the real concern for this case, the reason it ended up in the confidential file, was that it involved the system of petitions breaking down. The autocracy could make laws that were as harsh as it wanted to—like, say, deporting people based on the sheer fact of their citizenship, not because of anything to do with who they were as individuals—in part because it had the system of petitions in place to allow it to say, “oh, but we didn’t really mean you, you can stay.” Petitions allowed the autocracy to be merciful. So it could make laws that it knew were going to be bad for some people it didn’t actually want to hurt, because it knew that petitions could create those exceptions. Except of course that mercy was just as arbitrary as the autocracy’s punishment could be. It could not be relied upon, it could not be trusted, because the law was also the law.

Alison Smith is a Professor in the Department of History at the University of Toronto. She is the author, most recently, of For the Common Good and Their Own Well-Being: Social Estates in Imperial Russia (Oxford University Press, 2014).