In their group website, “A Turning Point in the Communication Age: The ARPANET, The Ancestor of the Modern Internet,” Matthew Baker, Christopher Calandria, Jake Leland of James Martin High School argue that the “ARPANET” system was the precursor to the modern Internet. The group site examines how it functioned, why it was created, and explain how a modest government program expanded into a globally dominant technology. 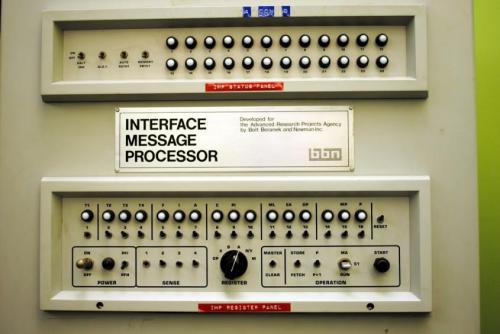 Baker, Calandria and Leland contend that that ARPANET was initially developed to facilitate greater communication between government researchers. They quote Leonard Kleinrock, one of the primary engineers of the program, recalls that what “initiated [the ARPANET] was the need to share resources among fellow researchers.” But by the late 1980’s and early 1990’s the ARPANET technology steadily entered the public as the Internet, irrevocably changing our economy and society.

However, the group argues that ARAPNET’s historical role was not uniformly positive and had a “dark side” of unforeseen consequences, including a rise in hacking, fraud and theft. They conclude by stating that the “Internet had considerable repercussions, both positive and negative” and that the “creation of The ARPANET was the significant turning point that resulted in these impacts.”

An interface message processor, or IMP, a network of small processors which allowed for the interconnection of different computers (Image courtesy of “A Turning Point in the Communication Age: The ARPANET”)