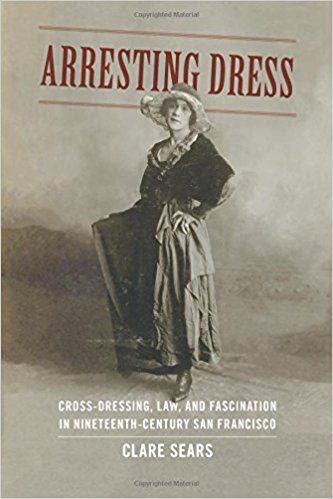 Clare Sears, associate professor of sociology at San Francisco State University, explores cross dressing and its place in the formation of San Francisco as an urban center in the mid- to late-nineteenth century. Sears uses codebooks, arrest records, and court reports to reconstruct the history of cross dressing in an urban setting. In her analysis, Sears determines that cross-dressing laws expanded to include the  policing of race, sex, citizenship, and city space. The result is a multifaceted work that examines how law and fascination with other people’s bodies create marginalized individuals. Sears pioneers what she calls “trans-ing analysis” as a mode of inquiry that encompasses the historical understanding and production of a boundary between what is considered normative and nonnormative gender.

The first two chapters of Arresting Dress construct for the reader a San Francisco that had been shaped by the instability at the end of the Mexican-American War in 1848 and the Gold Rush of 1849. These two events created a space in which a distinctly “American” urban landscape was never established, and it fostered a community of predominantly men. In this society where women were largely absent, cross-dressing became a form of entertainment and the subject of desire for other men. While some women did live in early San Francisco, there was only a small segment who engaged in cross-dressing. These women usually tried to subvert gender norms or they wove the social evils of prostitution and cross-dressing together by dressing as men to show their availability to customers.

One of the more interesting discussions in the book occurs in the third and fourth chapters as Sears recounts how the San Francisco Board of Supervisors moved to outlaw what they considered indecency and vice. While there were several activities they considered vices in San Francisco in the nineteenth century, the association of cross-dressing with prostitution was one reason why cross-dressing was outlawed. Furthermore, outlawing cross-dressing applied to other marginal groups of San Francisco society, such as Chinese immigrants who were viewed as threats to white Americans. For example, Chinese immigrants were accused of perpetuating prostitution and taking jobs from European-American workers. In many instances, it was presumed that Chinese immigrants entered the ports by cross-dressing, which threatened the United States and its citizens. In many ways, applying cross-dressing laws to the Chinese was a way in which white Americans could regain control. 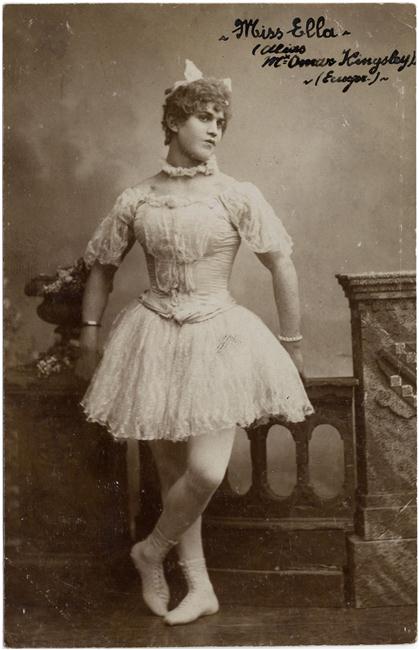 In the final two chapters of Arresting Dress, Sears outlines how enforcing anti-cross-dressing laws was based on looking at others’ bodies and deciding if their bodies could be clearly labeled as man or woman. Prescriptive dress and mannerisms were how law enforcement determined whether a person fit into gender roles deemed “normal.” As a result, law enforcement employed pulling wigs off women believed to be men, jailhouse medical examinations, and more invasive “mysterious” examinations by jail matrons. Enforcing such laws was an invasive means of preserving order, but it brought to the public’s attention to other people’s bodies that were subject to examination and held to be inferior if they did not adhere to expected norms.

While laws were established to regulate public cross-dressing, Sears also elucidates instances where the public exhibition of cross-dressing was allowed. Using freak show documents, Sears shows the reader that despite its illegality cross-dressing was allowed for entertainment. Where cross-dressing in public would have been grounds for arrest, the freak show was a source of entertainment and a livelihood for those individuals who cross-dressed before an audience. Sears also discusses slumming tours where the wealthy could view attractions such as Chinese opium dens and other similarly indecent spaces. As part of the experience, some tourist women could dress in men’s attire to have the full experience. If caught cross-dressing, these tourist women who were frequently white and wealthy could often escape punishment. 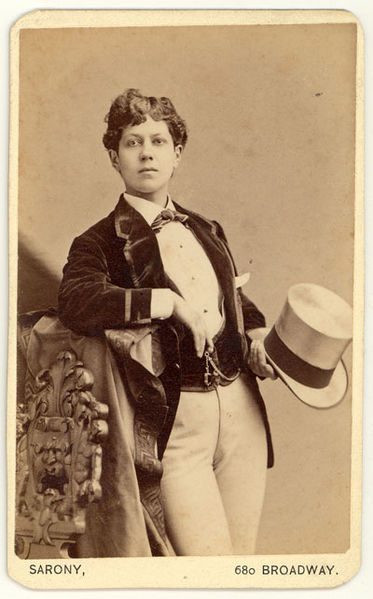 Ella Wesner around 1973 (via Wikimedia)

Finally, Sears also attempts to make far-reaching connections between cross-dressing and national identity by analyzing the intersection of cross-dressing and immigration laws in San Francisco. Sears rightfully mentions that federal laws such as the Chinese Exclusion Act of 1882 and local laws could not operate on the same level, but they were similar in their goals of ensuring that desired gender norms were required to belong in society. In judging who could come into the United States, those who cross-dressed were viewed as lacking in moral integrity and unworthy of inclusion in the national community. Positioned with a list of enumerated undesirables, such as prostitutes, the disabled, and vagrants, it is easy to see how the perceived connection between vice and cross-dressing and the subversion of gender norms would create a new category to discriminate against.

As a work of history, Sears makes extensive use of archival sources, but the viewpoint of the people who engaged in cross-dressing practices was unavailable. However, the sources she does use paint a portrait of how the law can regulate behavior that was previously acceptable. Sears, a sociologist, is also careful to not impose the present on her reading of the past, and respects the people who cross-dressed by not assigning sex or gender to them without their permission, so to speak. Arresting Dress is a necessary read for a time when transgendered individuals were frequently the subjects of laws that dictated acceptable gender expression. The history of cross-dressing shows the reader how the law can be used to discriminate against those who are different and in theory could be used to move away from such discrimination.

Also by John Carranza on Not Even Past:

How to Survive a Plague: The Inside Story of How Citizens and Scientists Tamed AIDS by David France (2016)