The War of 1812 was not a war between two nations, but rather a civil war, in which “brother fought brother in a borderland of mixed peoples.”   Alan Taylor focuses on the U.S.-Canada borderland, which stretched from Detroit to Montreal. Before the war, the distinctions between British subjects and American citizens in the region remained uncertain. 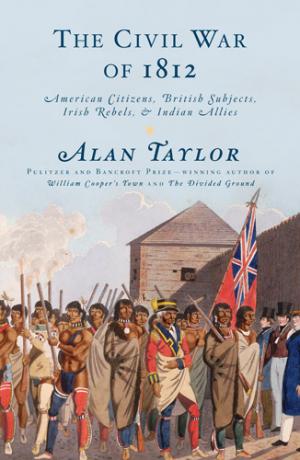 The British asserted that their empire’s subjects remained subjects for life, precisely when a stream of Irish people were migrating to the United States. Moreover, immigrants from the United States made up the majority of Upper Canada (present-day Ontario). Although the War of 1812 resulted in a stalemate from a diplomatic or military perspective, it gave closure to the contested border and resulted in the emergence of the United States and Canada as modern nation-states.

Taylor identifies four components that made the War of 1812 a civil war. First, The Republican-led American government vied with Britain over who would control Upper Canada. Yet, the U.S.’s poorly trained military struggled to occupy even a sliver of Canadian territory. Taylor describes how supply lines, propaganda, and prisons all played pivotal roles in the war’s outcome. Second, American Federalists sympathized with Britain. Most Federalists opposed the war and some even contributed to Britain’s war effort by smuggling, spying and threatening secession. Moreover, the United States never waged a significant campaign on the upper St. Lawrence River because Federalists in Ogdensburg, NY used their political influence to block such a strategy.  Possessing the St. Lawrence River would have weakened all of Upper Canada, which relied on the seaway for supplies. But Republican politicians from western New York and Kentucky successfully lobbied to make the Detroit and Niagara Rivers the primary American fronts. Third, Irish republicans who had immigrated to the United States renewed a failed rebellion in Ireland by enlisting in American forces. But, they also faced Irish soldiers who had joined the royal army, pitting Irishman against Irishman.

Taylor describes a fourth aspect to the civil war: the involvement of Native peoples. Many Indians joined British forces in the hopes of stopping further U.S. settlement in the Ohio Valley. However, Native peoples are curiously peripheral to Taylor’s narrative, and he instead highlights their ability to terrify untrained American soldiers and provide fodder for anti-British propaganda. Taylor’s emphasis on imagined Indians leaves some paradoxical questions unanswered. For instance, he argues that American General William Henry Harrison’s troops considered arming Indians to be racial treason. Yet Taylor has little to say about the two hundred some Native people who joined Harrison’s forces.  In addition, Taylor offers almost no biographical details on Native individuals. Those wishing for the next chapter of Taylor’s The Divided Ground (2006), which places the Haudenosaunee at the center of the American Revolution, will be disappointed.

Despite this shortcoming, Taylor’s borderland approach and assiduous research make for a welcome revision to an often overlooked war. The Civil War of 1812 should appeal to a large audience thanks to Taylor’s engaging narratives and elegant writing style.