At the end of 1960, near Cienfuegos, Cuba, on the Soledad estate of a U.S.-owned sugar company, the American Director and Cuban staff of Harvard’s Atkins Institution began packing up their scientific equipment. The Cuban Revolution had caught up with them. Director Ian Duncan Clement, his wife, Vivian, and lab technician Esperanza Vega worked quickly to put the station’s herbarium, library, and lab “in stand-by condition.” The station’s horticulturalist, Felipe Gonzalez, and his assistants pruned the trees in the station’s arboretum, preparing them “to withstand a period of neglect.”

The Atkins Institution had operated as an important field research station for visiting botanists and zoologists since shortly after the 1898 Spanish American War. It had survived difficult times in the past––hurricanes, economic depression, and the Revolution of 1933. Despite the escalation of Fidel Castro’s insurgency, Harvard held its Biology field course there as usual in the summer of 1958. The station remained unscathed even as the front lines of the revolution passed over its grounds later that year. Only when the Soledad estate was nationalized and diplomatic relations between the United States and Cuba disintegrated were the Clements and staff members Vega and Gonzalez forced to leave. They expected to return soon.

The former Harvard station continues today as a Cuban institution, the Jardín Botánico de Cienfuegos. Harvard’s loss (and Cuba’s gain) is a vivid example of the entanglement of biological science and politics in the twentieth-century Caribbean. Living and working at field stations like this one throughout the Caribbean shaped biologists’ ideas about the diversity of life on earth–– but maintaining these institutions during an era of U.S. hegemony in the region embedded U.S. scientists in broader structures of power. 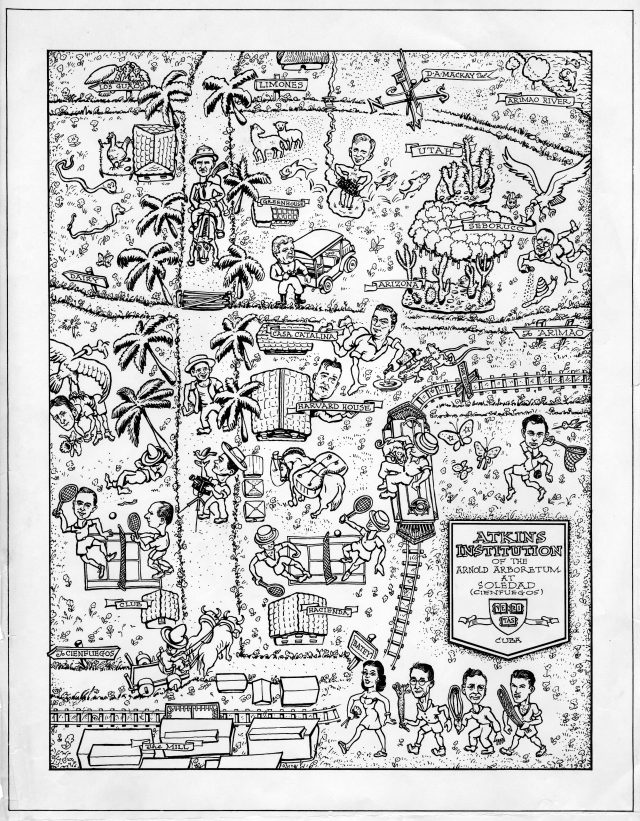 Cartoon depicting Harvard’s Atkins Institution at Soledad as a naturalist’s tropical playground. US scientists appear as recognizable caricatures, while the faces of Cuban staff are obscured. D. A. Mackay, 1941. © President and Fellows of Harvard College. Arnold Arboretum Archives.

Working in situ at field stations allowed researchers from the United States and Europe to intensively study living tropical plants and animals in their natural environments for the first time at the turn of the twentieth century. While the traveling naturalists of previous centuries had ransacked tropical lands in search of specimens to ship back to northern metropolitan centers, the new station-based fieldwork emphasized studies of the ecology, physiology, and behavior of living organisms in place. Like field stations in the United States and Europe, tropical stations playing a key role both in the rise of experimental biology and in the development of place-based ecological field methods. But because visiting researchers traveled from the comparatively species-poor temperate zone, their experiences working at tropical stations led them to focus especially on investigations into the ecological and evolutionary causes of the great species diversity of the tropics. 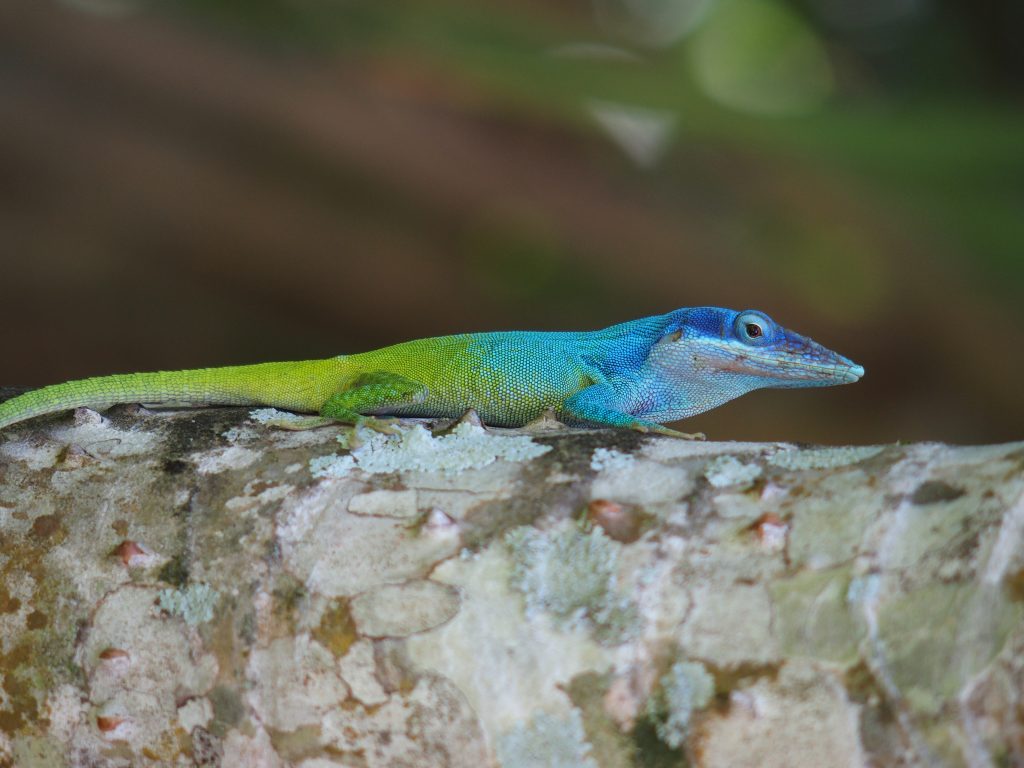 Stations in Cuba, Jamaica, Panama, Guyana, and Costa Rica were attractive to researchers from the United States, not only because they offered access to tropical nature, but also because they were seen to provide a place to live and work in comfort, health, and safety––insulating northern researchers from the real and imagined dangers of tropical environments. Working at these institutions also tended to isolate visiting U.S. researchers from their Latin American and Caribbean counterparts. Despite Cuba’s eminent and well-established scientific community, for example, most U.S. visitors experienced the Atkins Institution as a U.S. enclave. The Cubans they usually interacted with were laborers, assistants, or technicians who they did not see as scientific equals. 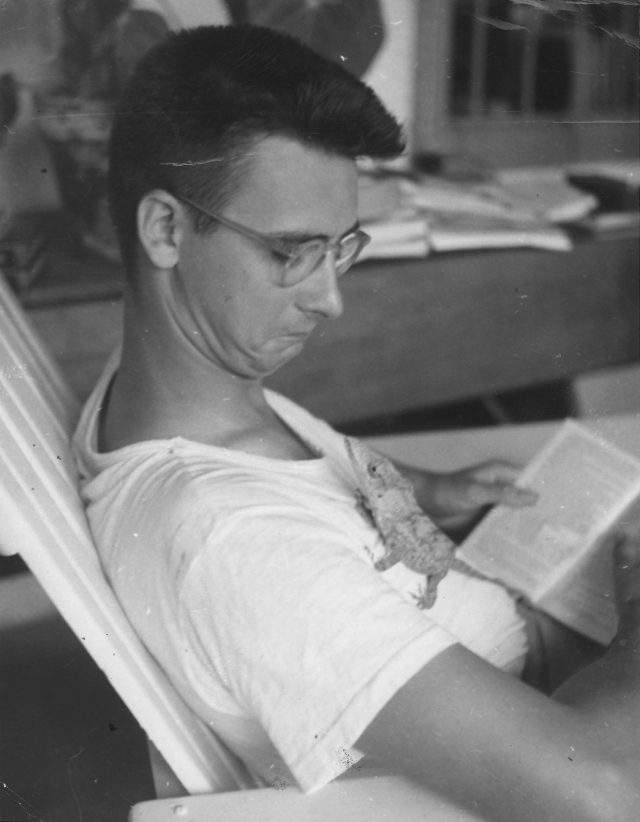 Even though they often had few ties to local communities, the growth of U.S.-run field stations were crucial to establishing a critical mass of biologists within the U.S. scientific community who had experience in the tropics,. By mid-century this group self identified as “tropical biologists.” Edward O. Wilson, one of the world’s most famous living biologists and a major champion of biodiversity conservation, for example, had his first formative visit to the tropics in Cuba as a student in Harvard’s Biology field course in 1956.

For U.S. biologists, securing longterm stability for their stations meant emphasizing the relevance of basic ecology to applied tropical agriculture and medicine. Tropical biologists struggled to maintain access to land and connections to streams of funding, transportation infrastructure, and local labor. They succeeded not by “carving out” space for basic research, but by linking support for basic tropical research to the concerns of the U.S. government agencies and corporations that dominated regional economies and politics. In the process, U.S. biologists began to argue that the diversity of tropical life was itself a resource. Harvard’s Cuban station, for example, had begun as a sugar experiment station, but by the 1920s, biologists had succeeded in expanding it into a broadly-based biological station. Rather than tie their professional concerns solely to a few economically significant commodity or pest species, tropical biologists framed the large numbers of unknown tropical species and their complex, little-studied ecologies as the most important source of untapped potential in the tropics.  In doing so, they laid the foundations of the modern discourse of biodiversity. 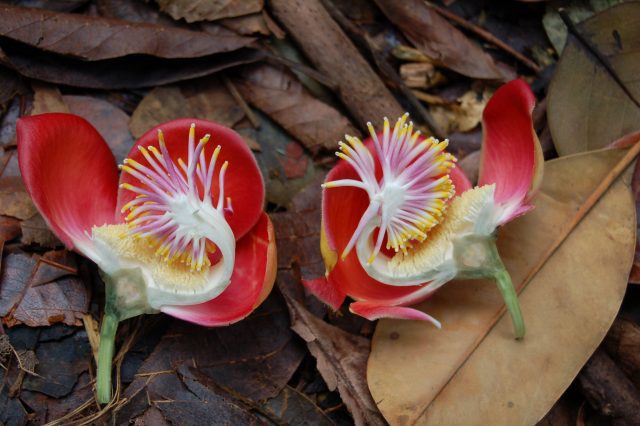 Such close ties to U.S. interests ultimately carried unforeseen risks. Even as the Cuban Revolution cut Harvard’s ties to its tropical station, other sites seemed threatened by a wave of nationalism and anti-colonialism. Even the Smithsonian’s influential station in the Panama Canal Zone seemed insecure as Panamanians called for renegotiations of the Canal treaties. In response, U.S. tropical biologists came together in the 1960s and 1970s to form new professional societies and institutions. For the first time, they also made substantial efforts to collaborate with Latin American and Caribbean scientists. They had long articulated the study of tropical biology in terms of its potential to aid U.S. national and corporate interests in exploiting the tropics. Now they rapidly shifted to emphasize the value of scientific cooperation, international development, and the conservation of tropical biodiversity.

To a degree not usually appreciated by either historians or scientists, “biodiversity” has Caribbean roots. Both the key concepts and values embedded in the biodiversity discourse were forged in U.S. biologists’ experiences at stations throughout the circum-Caribbean, from the era of the Spanish-American War through the revolutionary 1960s and 1970s. The scientific achievements of these institutions are impressive. Nevertheless, the legacies of exclusion and missed opportunities for connection between U.S. and Caribbean and Latin American scientific communities persist.

And see her recent article in American Scientist, “The Colonial Origins of Tropical Field Stations”

Read more about the history of ecological science and empire:

This excellent collection offers an introduction to the significant role of plant knowledge in early modern colonialism––including essays on such topics as “bioprospecting” and Alexander von Humboldt’s debt to Creole ecological ideas.

In one of the only books to examine the history of ecology, conservation biology, and the question of U.S. cultural imperialism, Lewis focuses on the relationship between American and Indian ecologists during the second half of the 20th century.

Challenging any dichotomy of “imperial” versus “national” science, McCook shows how agricultural science adapted to Caribbean contexts and gave rise to new forms of “creole science.”

Anker scrutinizes the variety of ways that early 20th-century British and South African ecologists applied their ideas to international politics and the management of human societies.

In a work of astounding breadth, Grove locates the dawn of conservationist thought in responses to the ecological destruction wrought by the colonization of tropical islands.