National identity has been both a dream and a nightmare for historians. When they attempt to historicize the concept, it becomes a thick web of actors, motives, and unintended consequences. 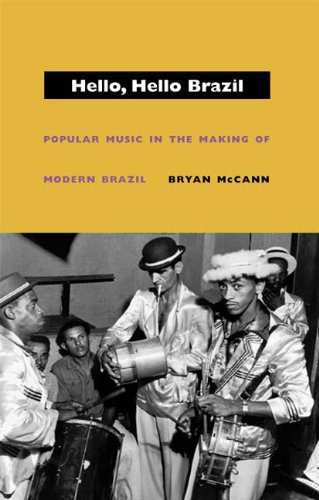 Exploring the “invention of tradition” underlying modern national identities proves an appealing but extremely difficult task. In Hello, Hello Brazil, Bryan McCann offers a suggestive method to master this process. By tracing the emergence of Brazilian popular music, he successfully shows how the “traditional” samba was composed in an unequal exchange between regional musicians and composers, state officers, recording managers, radio producers, and radio broadcasters. The history of modern Brazilian music must be understood, then, within the broader debate on “Brazilianness.”

Between the late 1920s and 1950s, three processes converged to foster the emergence of the new popular music: industrialization, urbanization, and bureaucratic centralization. At the same time, the cultural context saw an intensification of exchanges between high culture and popular innovators, a rapid growth of the broadcasting industry, and an activist government under the Vargas regime that aimed to manage cultural production. McCann inserts the history of the samba into the broader struggles around the definition of tradition, authenticity, and national music. He shows that samba was at the center of a broad political and cultural transformation, that allowed converting a “small collection of popular musical forms into both a thriving industry and a consistently vital mediation on the nature and contradictions of Brazilianness.” For example, the quest for authenticity connected with the rise of the samba included purist understandings of tradition that saw the American presence as a threat to Brazilian folklore. While the composer Heitor Villa-Lobos was an active defender of “authentic” Brazilian music and an enemy of international influences, another of Brazil’s famous musical nationalists, Ari Barroso, pointed out that “international influence was inescapable.”

Although the opinions were divided, McCann insists that Brazilians were not immune to American influence, having instead an ambivalent relationship with its seductive and repellent qualities. McCann argues that far from erasing Brazilian traditional music, as Villa-Lobos feared, the international presence fostered the quest for authenticity. An appealing desire for the “exotic” led U.S. record labels like Columbia to make recordings of the “most legitimate Brazilian music.” Furthermore, for MacCann, American record executives did not attempt to “Americanize” Brazilian music. Instead, they sought to make the Brazilian popular cultural market similar to that of the United States.

In brief, McCann offers a textured history of the actors, arenas, and trends that played a role in the making of a national music. Hello, Hello shows how these actors intersected to create the discourse that produced new Brazilian popular music. The Vargas era has been widely explored, the process of Americanization of Brazil during his regime also has received scholarly attention, and more recent scholarship has explored the “unevenness” of these exchanges. Nonetheless, MacCann’s book offers a subtle exploration of the entangled processes that led to the emergence of Brazil’s popular music, drawing in the significance of folkloric realms, quests for authenticity, an ambiguous appropriations in its development. It is the “texture” of this process that McCann offers to the reader.