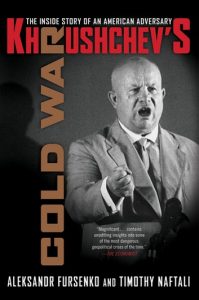 Nikita Khrushchev is one of the most important men of the last century. Moreover, he was the main protagonist of Soviet foreign policy during the most perilous period of the Cold War which climaxed with the Cuban Missile Crisis of 1962. How dangerous was the Soviet Union to the West during Khrushchev’s term? Which factors contributed to sow distrust between the United States and the Soviet Union, and to what extent the Soviet menace was more bluff than real capabilities? Fursenko and Naftali answer these questions successfully by presenting an extensive and well-researched study that uncovers Soviet foreign policy during the Khrushchev’s Era.

In Khrushchev’s Cold War: The Inside Story of an American Adversary, the authors explore the complicated balance between cooperation with the West and competition for Third World support that undergirded the Soviet diplomatic strategy from 1955 to 1963.To understand these diplomatic maneuvers, Fursenko and Naftali focus on Khrushchev’s complex policies of building détente with his penchant for risky brinkmanship and coercive diplomacy which, he hoped, would yield substantive geopolitical gains. From the two Germanys question to the Cuban Missile Crisis, the final outcome of this dual diplomatic approach proved contradictory. The competition for Third World allies diverted scarce economic resources from domestic problems, and exacerbated tensions between the superpowers effectively undermining any sustainable opportunity for détente.

Fursenko and Naftali underline two elements that contributed to heightened tensions during the Cold War. The first one, perception in international politics, led to the frequent misreading of the adversary’s intentions, fostering a strong and lingering feeling of mistrust and deception. This atmosphere of misunderstanding transformed the years between 1958 and 1962 into the most dangerous period of the Cold War concluding with the perilous Cuban Crisis that brought the world to the brink of nuclear war. 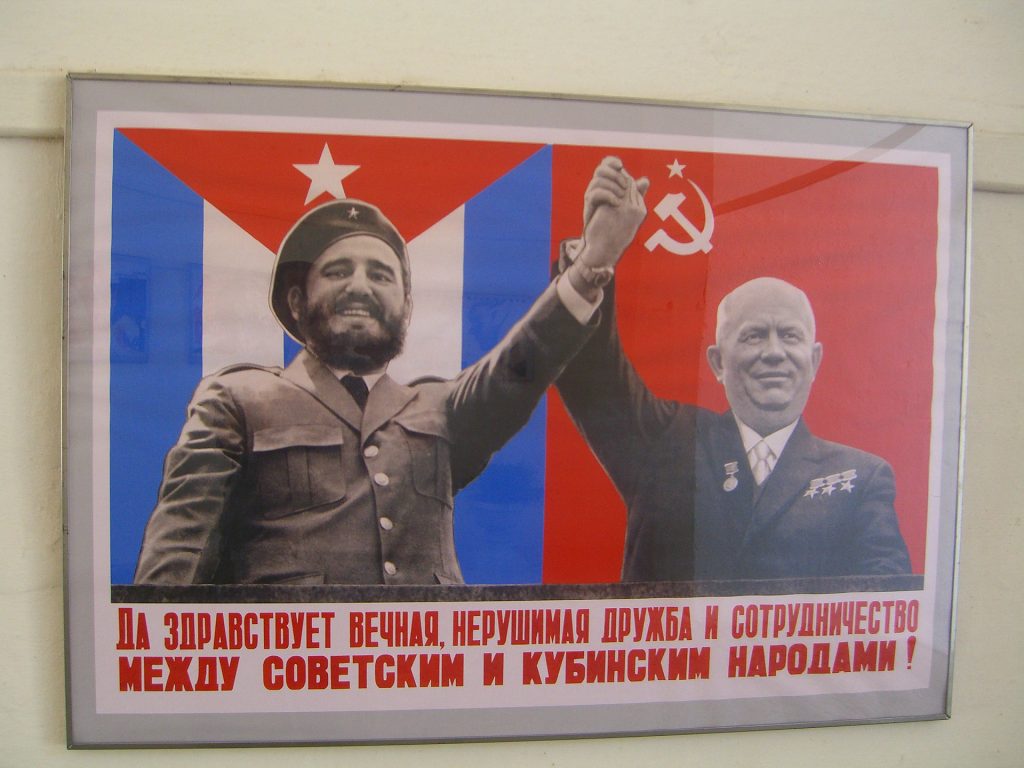 1960s poster with Fidel Castro and Nikita Khrushchev: “Long live the eternal, indestructible friendship and cooperation between the Soviet and Cuban peoples” (via Wikipedia)

The second element draws on the first, and involves the crucial role played by Third World leaders in aggravating the perceived threat that each superpower felt from the other. The authors do an excellent job in dispelling one of the greatest myths of the Cold War, the erroneous impression that the United States and the Soviet Union orchestrated and fully controlled events in Africa, Asia and Latin America. To the contrary, leaders like Fidel Castro and Gamal Nasser skillfully courted and played off the superpowers for their own gains. This perspective restores a great deal of agency to social and political actors that in other Cold War narratives have been relegated to the roles of mere pawns.

The authors conclude that Khrushchev’s foreign policy did much to preserve the boundaries of the Soviet empire but less in extracting considerable geopolitical concessions from the West. The inherent military weaknesses of the Soviet Union, coupled with limited economic resources, led Khrushchev to rely more on the appearance rather than the reality of Soviet power. However, his brinkmanship at least succeeded in deterring the United States from invading Cuba and in securing recognition for East Germany in the long run.

The book’s writing style is fluid with a clear prose, making it accessible to any audience. This is quite an achievement in a co-authored work. Fursenko and Naftali also succeed in providing an informative and compelling account of Soviet foreign policy under Khrushchev by relying mostly on declassified material from the Soviet Presidium. It is certainly a pertinent starting point for anyone interested in the intricacies of world affairs and foreign relations from the Soviet perspective.

The King’s Living Image: The Culture and Politics of Viceregal Power in Colonial Mexico
A Poverty of Rights: Citizenship and Inequality in Twentieth-Century Rio de Janeiro
Paper Cadavers: The Archives of Dictatorship in Guatemala
The Gorbachev Factor