During World War II the United States shipped an enormous amount of aid to the Soviet Union through the Lend-Lease program.  The significance of this aid to the Soviet war effort has long been debated.  During the Cold War, the Russians minimized its impact and the West exaggerated it.  While it is obviously impossible to know what would have happened without the aid, it is clear that Lend-Lease came too late to be the decisive factor in the Soviet victory.  But it is equally clear that when aid began to arrive on a massive scale, it significantly increased the speed with which the German Army was pushed out of the Soviet Union.  Without Lend-Lease, the Soviet people would have had to make even greater sacrifices and would have suffered even  more deaths. 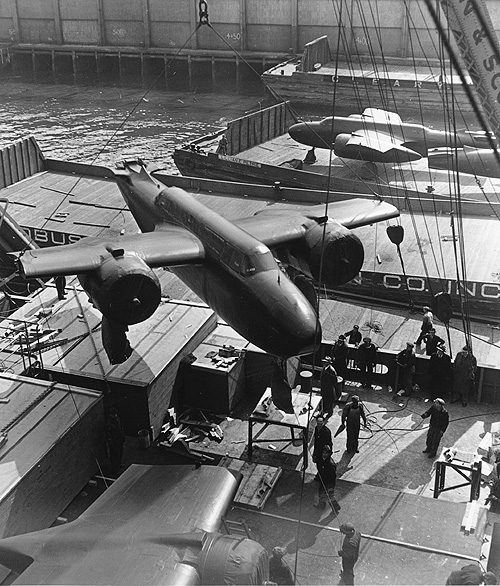 The American Lend-Lease aid program was passed by the United States Congress in March of 1941 originally to support the war effort in Great Britain.  American public and congressional opinion at first resisted the idea of extending the aid to the Soviet Union.  Many Americans shared the views of Senator Harry S. Truman of Missouri, who argued, “If we see that Germany is winning, we ought to help Russia.  If Russia is winning, we ought to help Germany.”  But aid was offered to the Soviet Union in October 1941 and when Hitler incautiously declared war on the United States four days after the Japanese attack on Pearl Harbor, the de facto American-Soviet alliance became a reality.

Most of the early aid arrived on the dangerous “Murmansk run.”  In raging seas and Arctic temperatures, convoys carrying American war materials and basic goods ran a gauntlet of German air and U-boat attacks, from Great Britain to the Soviet Arctic ports of Arkhangelsk and Murmansk.  One convoy lost 70 out of 80 ships.   Later in the war, the Pacific route, a short voyage across the Bering Straits from Alaska to the Siberian port of Vladivostok, made up nearly half the shipments, and one-third came over the mountains into Soviet Central Asia via the Persian Gulf. 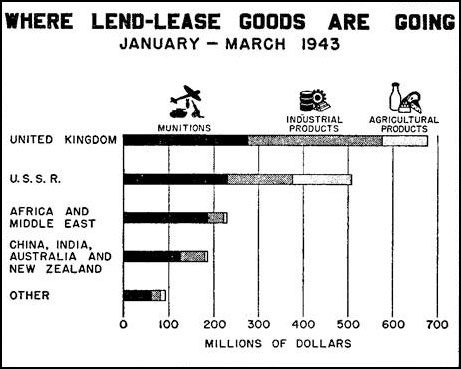 The main American motive was self-interest, not generosity.  While remaining suspicious of Stalin and the Soviet leadership, President Roosevelt believed the United States could lose only if Germany emerged victorious on the Eastern Front.  With Germany controlling the continent of Europe from the English Channel to Central Russia, it was in the western Allies’ interests to help the Red Army fight the German forces.

Nor did the Russians see Lend-Lease as charity.  They saw themselves as carrying the war on their shoulders in its most critical phase.  As late as the end of 1942, the Red Army faced 193 German divisions, while Anglo-American forces in Africa faced only four.  To Stalin and people in the Soviet Union, the western Allies’ failure to open a second front in Europe until June 6, 1944 was deliberately intended to let the Soviet Union bear the brunt of the fighting and casualties. 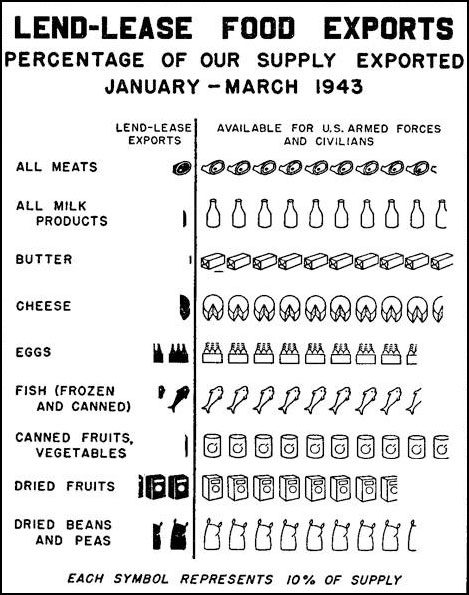 Lend-Lease aid was slow to arrive.  During the most crucial period of the war on the Eastern Front it remained little more than a trickle.  Only following the Battle of Stalingrad (August 19, 1942-February 2, 1943), when the Soviet Union’s eventual victory seemed assured, did American aid began to arrive on a significant scale – 85% of the supplies arrived after the beginning of 1943.  Although the vast majority of the Red Army’s best aircraft, tanks, guns and ammunition continued to be manufactured in the Soviet Union, its mobility and communications, in particular, came to rely on Lend-Lease.

The Soviet ability to mount massive and overwhelmingly successful offensives against the still formidable German forces depended on the more than 360,000 trucks, 43,000 jeeps, 32,000 motorcycles, 380,000 field telephones, 2.5 million belts and 14 million boots produced in the United States, as well as large amounts of other equipment. Soldiers also depended on American food supplies, including hundreds of thousands of tons of Spam and other canned meat.  Red Army troops advanced into Berlin driving American trucks and wearing American boots.  As Stalin told Roosevelt, without Lend-Lease “victory would have been delayed.”

Ironically, although the Soviet Union would have won the war on the Eastern Front without Lend-Lease, American aid facilitated the Red Army’s arrival in Eastern Europe before Anglo-American forces, which set the stage for the beginning of the Cold War.

Russian newsreel video about Lend-Lease on our blog

To read more about the war on the Eastern Front:

Photo Credits:
American Douglas A-20 bomber, provided through Lend-Lease, is loaded on to a ship bound for Allied ports, ca. 1943. Photo by Gruber for U.S. Office of War Information, via Wikimedia commons
Graphs from “One for All, All for One: The Story of Lend-Lease”