I generally go out of my way to avoid historical novels, unless they were written in the nineteenth century. But I’m happy to recommend a slightly different sort of book, one that could be described as lightly fictionalized history. This approach has its roots in magisterial works of history such as Carlo Ginzberg’s The Cheese and the Worms and Natalie Zemon Davis’s The Return of Martin Guerre, and has become a trend in popular history-writing. Practitioners are usually professional historians working from legal evidence. Typically, they take the reader into the archives for a ‘real-life’ sense of the research experience, but then write up their archival evidence with a light, “commonsensical” fictionalization. For example, they invent thoughtful walks in the piazza, or speculate about probable conversations between would-be assassins.

In my area of specialization, the Italian Renaissance, recent examples of lightly fictionalized history include Lauro Martines’ Fire in the City: Savonarola and the Struggle for the Soul of Renaissance Florence (also published as April Blood) at the top of the list, followed by Anthony D’Elia’s A Sudden Terror: The Plot to Murder the Pope in Renaissance Rome and Marcello Simonetta’s The Montefeltro Conspiracy: A Renaissance Mystery Decoded.

The newest example is Craig Monson’s Nuns Behaving Badly: Tales of Music, Magic, Art, and Arson in the Convents of Early Modern Italy, which opens true to form by describing what it’s like to work in the Vatican Secret Archive before moving on to five short chapters about strong-minded nuns in Bologna, Pavia, and Naples. 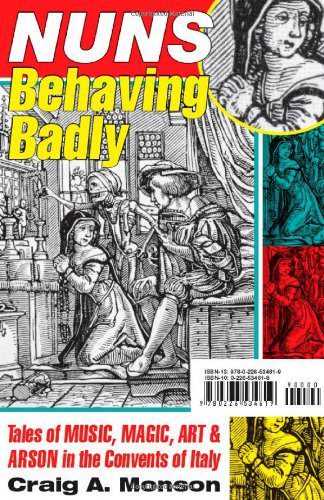 For a recent graduate seminar, the book raised wonderful questions about the line between history and fiction, about the historians’ double responsibility to the archives and to audience. Everyone, no matter their position on these questions, agreed that Monson is a great story-teller: the book is engrossing and provocative. One grad student, celebrating the historian’s decision to serve the widest audience possible, made plans to buy it for her father for Christmas.

Unknown artist, painting depicting the hanging and burning of Girolamo Savonarola in Piazza della Signoria in Florence in 1498