In 2001, I was a junior at the Bronx High School of Science in New York City. On the morning of September 11th, I was sitting in my second period AP US History class, taught by Dr. Melvin Maskin. On days when he was feeling particularly enthusiastic about a lesson, he’d scrawl things like, “The Doc is IN DA HOUSE” on the blackboard. He was always doing things like that: making silly jokes or referencing song lyrics in tests, to get us excited about settling in for a class period of history.

On that day in early September, we were talking about why other countries in the past had entertained economic and political complaints against America. Sometime after the first plane crashed, someone—I don’t remember who—came on the school’s loudspeaker and announced that a plane had just struck the Twin Towers. Dr. Maskin stopped to listen, and once the announcement had ended, he leapt into action.

“Get the radio!” he shouted. 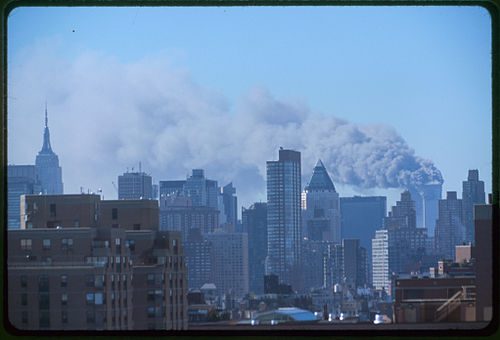 Someone dug it out of the closet, and we turned it on and gathered around it to listen to the news while Dr. Maskin added side commentary. He was so riveted by the story unfolding around us that his energy more than anything else alerted us to the fact that the moment was important. There we’d been, talking about why other countries didn’t like America in the eighteenth century, and now here we were, listening to audio reporting that would be a primary source of twenty-first-century history tomorrow. We still didn’t understand why the Twin Towers had been attacked, but we had suddenly become historians seeking out the roots of those questions. For the last ten minutes of that class, history in Dr. Maskin’s classroom was the only constant left in my New York City.

The rest of that day was chaos. No one was sure which class period we were supposed to be going to, and eventually, most of the school ended up in the gym before they allowed us to go home for the day. In-between the random bells that signaled the end of a class, I waited in line to call my mother on a pay phone and make sure that she was okay (cell phone service was completely scrambled). The MTA was a mess, so public transportation options were shot and few of us had ways to get home.

At the time, I had a boyfriend who lived in the Bronx. His parents’ apartment building was not particularly close to the school, but it was closer than Manhattan, where I lived. After the school let us go, a group of us began the long walk to his house, where we watched more of the coverage on TV. Only later would we hear from friends at Stuyvesant High School in Manhattan—our main rival—about students being able to see people jumping from the burning buildings, and watching the ash that drifted their way.

I will admit that although I understood the destruction, it didn’t mean very much to me at that time. In 2001 I had no blog, but a September entry from 2002 reveals that the anniversary did not weigh heavily on my mind. I remember feeling warmed by how New Yorkers bonded together, and vaguely worried, in the way of an underage teenager without a vote, about how politicians were using the attacks for their own purposes.

So what has stuck with me from that day has been Dr. Maskin’s behavior in our history class. Even in the face of the attacks, he retained the cool, analytical poise of a historian. On September 11th, I learned how historians have to ask those difficult questions, even when present events are shrouded in uncertainty. He made us aware that we were witnessing history in the making, an event akin to our parents’ watching the moon landing or hearing about JFK’s assassination. It was a horrible, devastating event, but it was history nonetheless, and we had to engage with it. Dr. Maskin hadn’t planned it, but that was one of the best teaching moments that I’ve seen, ever. He was also one of the few adults who responded to a completely unanticipated occurrence in a way that lent structure to the day and the way we experienced it.

I am a historian because of Dr. Maskin. He was one of the first teachers I had who connected history to the present and who demonstrated why it was important that we continue to study the past. That was my junior year. In my senior year of high school, I applied to college as a prospective history major. That is how I remember 9/11: as the moment when I became a historian.

Photo Credit
Library of Congress Collection of unattributed photographs of the September 11 terrorist attack on the World Trade Center, NYC. Via Wikimedia Commons