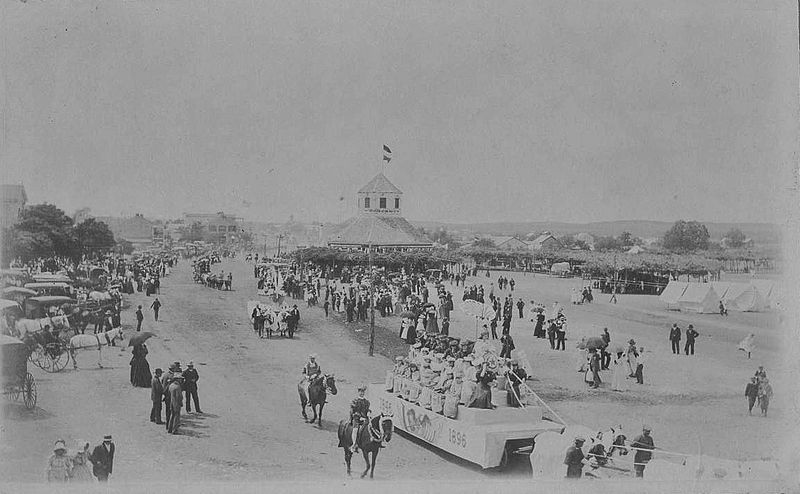 Fredericksburg, TX in 1896. The photograph shows the 50th Anniversary parade celebrating the 1846 founding of the town, with the Vereinskirche in the background (via Wikimedia)

Fredericksburg is a small town in central Texas.  Known for its wineries, beer halls, and its World War II museum, it is now often overshadowed by the urban hubs of San Antonio and Austin, both within a two-hour drive of town.  Yet, in 1847 Fredericksburg was a point of serious contention for Texans, Germans, Americans, and the Comanche, marking the edge of many clashing frontiers. Fredericksburg was situated precariously on the border of the Comanche Nation, the Mexican-American War was in full swing, and the Comanche were the most powerful military force on the plains. The German Emigration Company (the founders of Fredericksburg) owned rights promised by the former Republic of Texas to lands starting on the north bank of the Llano river.  At the same time, unfortunately, the United States guaranteed the Comanche that they would not spread north of the same river. As a result, come the beginning of 1847, the small town of Fredericksburg found itself at the center of an international crisis. German immigrants and businessmen, the Comanche, U.S. Indian agents, and Delaware Indian guides all walked a delicate line, trying to gain from the Comanche-German conflict while avoiding a Comanche-American conflict that risked pushing the Comanche into an alliance with Mexico.  Simply put, the stakes were high.  A Comanche-Mexican alliance could have ended U.S. dreams of a coast to coast empire.

In the end, the potential conflict was avoided. The Penateka Comanche and the German Emigration Company signed the Comanche-Meusebach Treaty in May of 1847.  The moment is immortalized in Fredericksburg with the “Lasting Peace” monument, whose plaque claims that it “is the only known peace treaty with Native Americans thought never to have been broken.” The monument’s hero, John O. Meusebach, was an essential figure in the founding of Fredericksburg and in early Texas history, but his grandeur fails to disguise the intuitively outlandish claim that a peace treaty with the Comanche, who are now confined to a reservation over 340 miles away, remains unbroken.

The monument is far from alone in its celebration of Meusebach’s success. Historians, such as T.R. Fehrenbach, in his famous Lone Star: A History of Texas and Texans, have celebrated Meusebach ever since naturalist Ferdinand von Roemer published an account of the treaty in 1848.  As a rule, we should no longer be shocked by misleading histories and outrageous claims that seek to distance American expansion from theft of lands already controlled by indigenous peoples.  Yet, the irony of the plaque is that on further exploration the claim of a lasting peace is, in a sense, true.  The treaty, as it is written, was never broken. 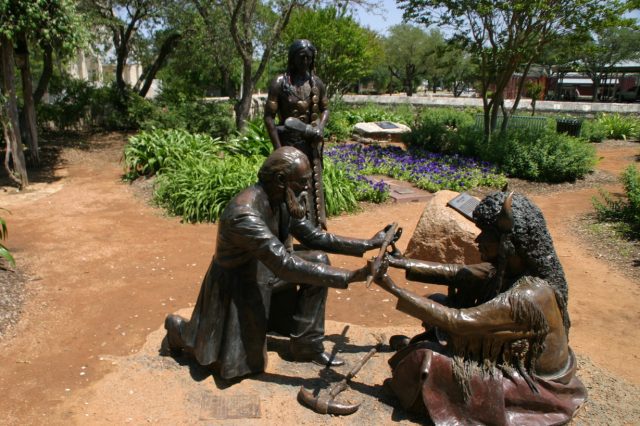 In the monument, Chief Santa Anna sits cross-legged, receiving a peace pipe from John O. Meusebach who kneels on one knee before him. The peace pipe represents the Treaty, which Meusebach and Santa Anna (along with others) negotiated throughout the spring of 1847.  The implications of Meusebach’s motion offering Santa Anna the pipe is essential to understanding how the monument misleads.  Meusebach’s movement suggests power through action, while Santa Anna, seated, passively receives the gift of peace from the heroic German settler. A pre-conceived power dynamic in which Europeans dominated cross-cultural and geopolitical interactions is reinforced by the motion.  Yet, we now know such power dynamics misrepresent Comanche-European relations.  The Comanche held it within their power to offer peace.  Bluntly put, the Germans could not mount a meaningful attack on the Comanche while the U.S. government’s fear of conflict and thinly spread army meant American forces were ill-prepared to go to war over Fredericksburg. Meusebach did not bestow peace on the Comanche. Rather, he bought it.

Meusebach’s treaty promised the Comanche $3,000 in gifts along with freedom to camp and trade in Fredericksburg in exchange for the safe passage of Germans to speculate and settle the land from the Llano river north to the San Saba river [1]. As a result, since the Germans lacked the means to force the Comanche out of Fredericksburg in the first place, the peace was kept, because the Comanche, not the Germans, maintained it.  Nevertheless, the treaty is puzzling.  Only one year before, in a treaty between the Comanche and the United States, the Comanche were promised all land north of the Llano River.  They understood that the U.S. government feared their involvement in the war.  Meusebach needed Comanche permission to settle the land. How the Comanche understood the treaty is less clear.

In order to tackle why this treaty was signed, we must reimagine the thought processes by which Comanche engaged in treaties and explore their potential motivations.  First, the Comanche understood geopolitics in the region.  Similarly, the Comanche, along with their Anglo-European counterparts, were sensitive to the specificity of language in treaties.  Historians Vine Deloris Jr., Raymond J. DaMallie, and Pekka Hämäläinen remind us that not all treaties represent United States government taking advantage of Indian Nations, and the Comanche were rational, intelligent, and keen political actors who put great value in both real and fictive kinship. Texans at the time were acutely aware of Comanche power and of their political culture. The presence of Delaware Chiefs, a group know continentally as a wise, rational, and trustworthy people were thought of as distant kin by the Comanche. Their advice would have been well received by Comanches of the time.  Similarly, the presence of R.S. Neighbors who was famously friends to the Comanche, suggests that the governor of Texas was aware of how the Comanche understood diplomacy, and that they actively catered to it [2]. 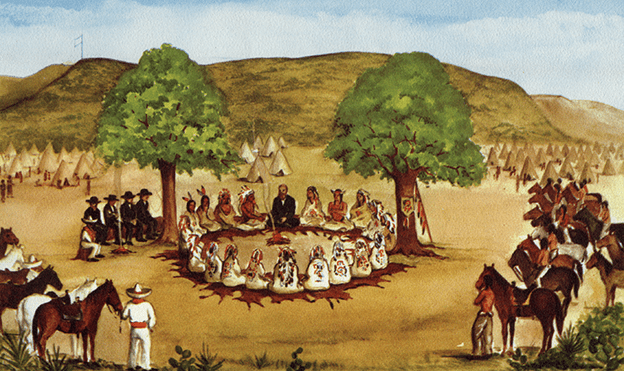 Importantly, the Comanche did not forfeit land rights in the treaty. The agreement is not a peace treaty at all.  Rather, the Germans agreed to pay tribute to the Comanche for safe usage of Comanche land.  Such an arrangement was familiar to the Comanche who often made similar arrangements with other Native Americans, allowing them to hunt in Comancheria in exchange for gifts and trade.  There is little reason to think that Comanche approached this scenario in a radically different manner.  The treaty is not an example of heroism and bravado on the part of Meusebach, as the monument would have us believe. It is an implicit acceptance of Comanche domination and power.  The lack of violence following the treaty, which Fehrenbach correctly determined was proof of an unbroken treaty, was not due to the benevolence of Meusebach, who frankly lacked the military means to break it.  Instead, it was a result of Santa Anna’s and the other Comanche war chiefs’ willingness to stick to their word.

Re-examining the treaty shows us how well told stories are sometimes in need of revision.  Interpretations of the Meusebach-Comanche Treaty were not inherently incorrect, but they were limited in perspective.  Upon seeing the monument, we presume that the Comanche were swindled out of land and that Meusebach bestowed the peace upon the Comanche. The sleepy town in central Texas that we see in 2018 was the center of conflict in 1847. Re-examination reveals the contingent nature of westward expansion and the Mexican-American War, while reinforcing the essential role that indigenous attempts to prosper and thrive played in Anglo-European expansionist policy.

Justin Heath reviews Peace Came in the Form of a Woman: Indians and Spaniards in the Texas Borderlands by Juliana Barr
The Curious Life of General Jackson’s Horses Hair by Josh Urich
“The Die is Cast”: Early Texans face the Comanches