This article is part of an occasional series of articles highlighting the fascinating collection of historical documents in the Briscoe Center for American History at UT Austin.

The Telegraph and Texas Register was the most influential newspaper in the region between colonial settlement and the Civil War. Based in Houston and intended for popular consumption, the nationalistic editorials in this publication offer a window into how the newly formed Lone Star Republic viewed the challenges of rapid territorial expansion into contested territories along the lower Great Plains.

One editorial in the Telegraph, published on November 3, 1838, provides a particularly revealing view of the new republic’s reaction to increased conflict with the Penateka Comanche people. This specific time in Texas’s history represented a transitional stage between the Texas Revolution of 1836 and the Anglo-Indian Wars that exploded across the plains between 1839 and 1841. Though the Anglo-American colonies of Mexican Tejas had frequently grappled with smaller tribes east of the Colorado River, they had yet to decisively engage the massed cavalries of the Plains Indians. The Telegraph article by Francis Moore was written in response to a recent Comanche victory over a group of settlers, and focused on the confrontation emerging in the San Antonio region. 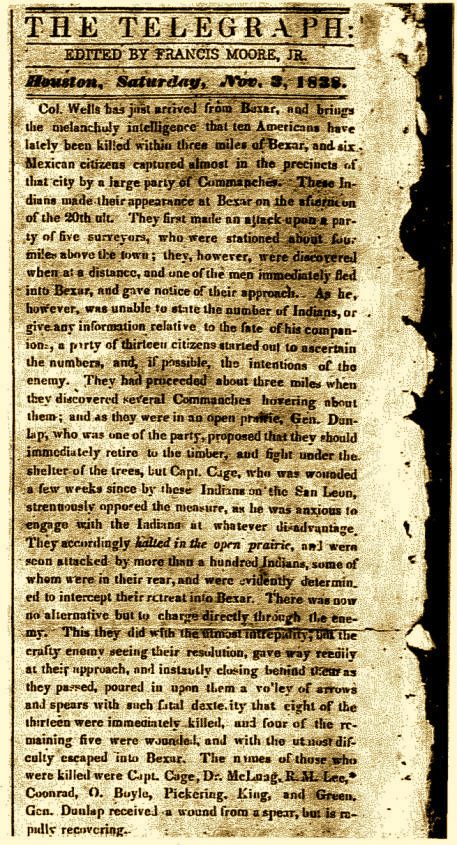 Moore’s editorial sheds light on three ways Anglo-Texans perceived the Comanche and the threat of their power.  First, the article emphatically stated that “war with this tribe has become inevitable” and called for mobilization by the Texas government. This enthusiasm for large-scale warfare represents a transition from the Texans’ historical reliance on localized militia to a society- wide engagement with national armies. Second, the editor admits the culpability of “rash men” who have “aided in plunging the whole country into a murderous conflict” in order to seize western property, but then fatalistically disregards this causality, shifting blame onto the Native population: “The die is cast — the tomahawk is uplifted, and the hundreds of helpless mothers and children call aloud for protection.”

The third point reveals a tactical shift in ideas about defeating the Native American warriors. Moore suggested that the republic launch the offense with an “expedition” of “mounted men” to “penetrate into the very heart of the Comanche country.” This shows that by 1838, Anglo-Texans had fully embraced the cavalry culture of the region. They also apparently understood that their own defensive strategies were insufficient against arguably the most lethal raiders in North America, who were defending their territory against European settlers who were seizing and occupying it. 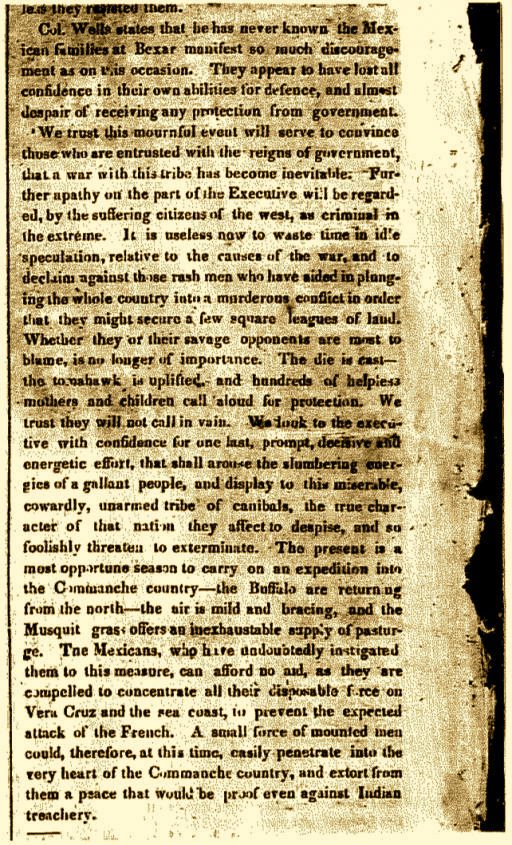 The editorial’s prescriptions –to mobilize the army and population for a large-scale, cavalry war — would soon become tragic reality. Over the next three years the Texan and Comanche peoples clashed in an unprecedented scope of ethnic warfare to decide the fate of West Texas. While both peoples launched massive and destructive invasions into each other’s heartlands, the Anglo-American sustained use of expeditionary methodology suggested by the Telegraph proved decisive. By 1845 Texas broke the power of the southern Comanche for a generation and the Lone Star Republic solidified its control of the territories between the Red River and the Rio Grande.

We trust this mournful event will serve to convince those who are entrusted with the reins of government, that a war with this tribe has become inevitable. Further apathy on the part of the Executive will be regarded, by the suffering citizens of the west, as criminal in the extreme. It is useless now to waste time in idle speculation, relative to the causes of the war, and to declaim against those rash men who have aided in plunging the whole country into a murderous conflict in order that they might secure a few square leagues of land. Whether they or their savage opponents are most to blame, is no longer of importance. The die is cast-the tomahawk is uplifted, and the hundreds of helpless mothers and children call aloud for protection. We trust they will not call in vain. We look to the executive with confidence for one last, prompt, decisive and energetic effort, that shall arouse the slumbering energies of a gallant people, and display to the is miserable, cowardly, unarmed tribe of cannibals, the true character of that nation the affect to despise, and so foolishly threaten to exterminate. The present is a most opportune season to carry on an expedition into the Comanche country-the Buffalo are returning from the north-the air is mild and bracing, and the mesquite grass offers an inexhaustible supply of pasturage. The Mexicans, who have undoubtedly instigated them to this measure, can afford no and, as they are compelled to concentrate all their disposable force on Vera Cruz and the sea coast, to prevent the expected attack of the French. A small figure of mounted men could, therefore, at this time, easily penetrate into the very heart of the Comanche country, and extort from them a peace that would be proof against Indian treachery.