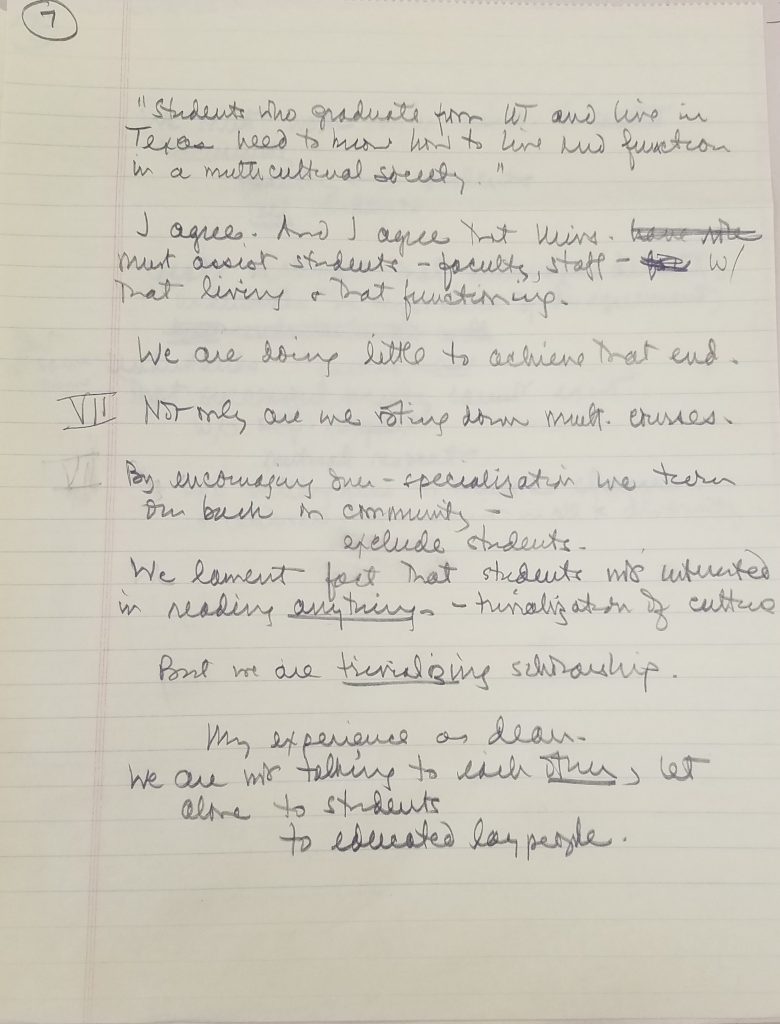 “What are you going to do with your degree?” This one question, asked by well-meaning family members at Thanksgiving dinner and smug strangers over the Internet alike, embodies one of the biggest obstacles to the study of the humanities today: the notion that a college degree’s main purpose should be to serve as a stepping stone to a related career. This question effectively cheapens the bachelor’s degree to a four-year job training program and ignores the power of the academy and its students to act for the public good. Dr. Standish Meacham, who served as a professor of history, department chairman, and dean of the College of Liberal Arts at The University of Texas at Austin in the second half of the 20th century, can be seen as an example of this power as he used his position to advocate for social equality and consciousness in a contentious time of American history.

Meacham came to The University of Texas in 1966, lured by the idea of an “academic frontierland,”  a landscape free from the restrictions of the Ivy League. In this frontier, aided by the financial support of University of Texas Chancellor Harry Ransom, Meacham was instrumental in creating an exhibition of the photography of Paul Martin, leading to an enduring interest in the history of the British working class and leftist politics. His academic interest in marginalized people is reflected in his commitment to equity and fairness as an administrator.

Dr. Meacham wanted the academy to look like the community it served. Dr. Meacham was named chair of the History Department in 1970 and he developed the department in the face of challenges from the university administration. He resigned in 1972 in protest of restrictions on faculty influence in university decision making. Returning to the chair in 1984, Meacham oversaw growth in the department once again, including the hiring of three female professors. Satisfied with his work, he stepped down following the 1987-88 academic year. At the urging of several colleagues, Meacham allowed his name to be put in the running for the new Dean of the College of Liberal Arts and assumed the office in 1989. Stepping in to the office of the deanship would open Dr. Meacham to what was the greatest moment of controversy of his already tumultuous academic career.

The university, like many other state schools at the time, was consumed by a battle over the role of higher education in Reagan’s America. Meacham advocated for a more inclusive university. In a set of undated notes, he approached the issue from a practical perspective: one day Anglo-Americans will no longer be the majority demographic in Texas and that “successful society cannot exist… without willingness to welcome change and celebrate human spirit in all its diversity.” He believed that universities had an obligation to make all students feel secure to have true freedom of thought in academia. Taking the argument further, Meacham wrote that the United States had benefited from a multicultural population since its founding. He believed that even though universities had not been multicultural from the beginning, it would be worth the effort to make them so. Meacham believed that universities had an obligation to maintain a community that facilitates “mutual respect” and “guarantees psychic security.” Meacham practiced what he preached and he oversaw the hiring of nine people of color to the College of Liberal Arts faculty. However, not all of Meacham’s efforts met with success.

In 1990, a proposed class in the English department – “E 306: Writing About Difference” – became a political battleground.  The course was a writing composition course focusing on matters of racism and sexism, and would have been required for all students. Meacham supported the idea, and allowed the English Department to create a syllabus. Soon, however, news of the proposed change reached the press, and “Writing About Difference” attracted national news coverage. Conservative faculty members claimed that the new syllabus was unnecessary and politicized a required course. Their argument gathered momentum, both on and off campus, as professors and columnists alike attacked the course as propaganda. At the behest of University President William Cunningham, Meacham postponed the implementation of the course for a year. In the end, the course was never taught and Meacham resigned from the deanship soon after, returning to the History Department to teach.

Although “Writing About Difference” was never taught, Dr. Standish Meacham’s support of E 306 was emblematic of his dedication to inclusivity in the university and his commitment to using the university a tool for the public welfare. He wanted a university education to reflect the complex reality of American history, not just an idealized memory. His research on English working class history went hand in hand with his actions as an administrator. In both facets of his academic life, Dr. Meacham was devoted to the building up of marginalized groups. An academic background in the humanities – in History – shaped Dr. Meacham’s view in a way that drove him to make a positive impact at the University of Texas.

Textbooks, Texas, and Discontent: The Fight Against Inadequate Educational Resources
Advancing Democracy: African Americans and the Struggle for Access and Higher Education in Texas