One evening this summer, I found myself careening down a country road at breakneck speed to the town of Studen Izvor on the Bulgarian border with Serbia.  Stunning scenery enveloped a string of thinly populated towns, some peppered with socialist-era industrial ruins that somehow added to the charm. Edit, the wife of my friend and colleague Kiril, drove like a bat out of hell. The trip, after all, was Edit’s bright idea. She knew I was interested in the history of food in Bulgaria and so planned this little day trip for the three of us. But we were running late and there was no way that we were going to make it to the yogurt museum before closing time. We had lingered too long over a meal in a traditionally themed restaurant on the edge of Sofia, the Bulgarian capital, where I had ordered a rather salty filet of “brain” in the interest of culinary adventure. Clearly agitated, Kiril put in a call to the museum from the speeding car, pleading with the museum staff to stay open late for the “visitor who had come all the way from America.” Of course, they waited. 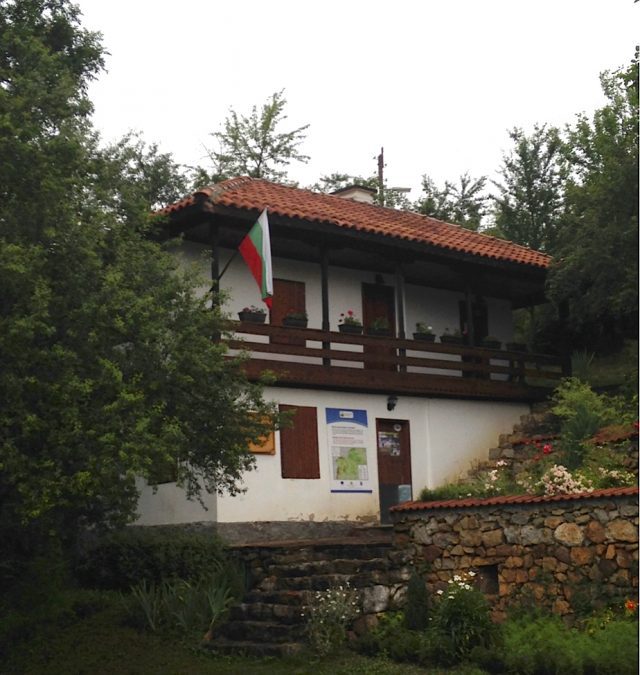 The Museum of Bulgarian Yoghurt in Studen Izvor, near the western border of Bulgaria (via author).

Finally we pulled into museum’s small gravel parking lot with a dramatic spray of pebbles. As we ascended into the sleepy mountain village with our Sofia license plate, the few elderly inhabitants followed us with their gaze from their courtyard perches. A Bulgarian woman, with a few family members in tow, warmly greeted us and we profusely apologized as they led the “American visitor” and her Sofia entourage into the small freshly painted rooms of their brand new museum. The yogurt museum is one in a string of small food museums—along with one for honey, and beans—that are scattered across rural Bulgaria. Created with EU funds, they are part of larger effort to develop “sustainable tourism” through local attractions that are depicted on the freshly published tourist maps of Bulgaria available in any Sofia kiosk. While the tourist draw is…well, still minimal, for me the museum of yogurt or “kiselo mliako” (literally, sour milk) was pure inspiration! A starting point to dig deeper into the history of this critical ingredient in the Bulgarian (and now global) diet. 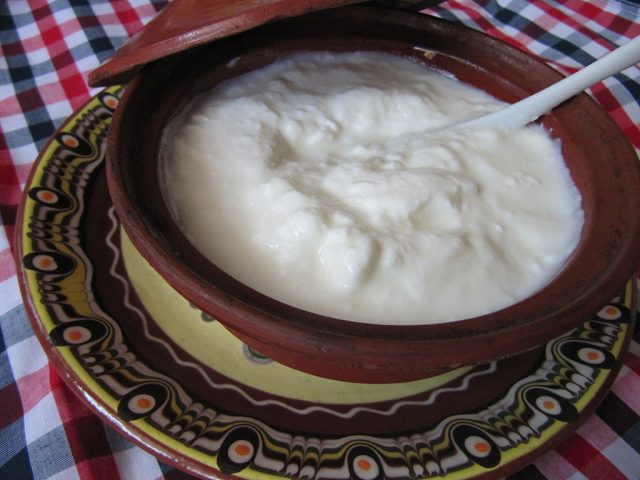 Bulgarian yogurt served in a traditional dish (via Wikimedia Commons)

While yogurt is consumed in much of the world, in Bulgaria it is a staple, often a part of breakfast, lunch, dinner, and dessert. It is used as the base of cold soups and sauces with garlic or herbs, or with honey as a simple dessert. The per capita consumption is roughly 27 kg, which is 4 times that of the US. Though most often sold and eaten plain, unlike in the US, it never says “plain” on the label. And indeed, Bulgarian yogurt is far from plain—even in its barest of forms. With choices commonly available of cow, goat, sheep, or water buffalo—the consumer is usually choosing by the distinct flavors of region, season, or animal rather than added fruit or other flavors. Much of the flavor comes from the way it is produced, in small local farms, largely in mountainous areas, with grass-fed and free-range animals. In part, what makes it so delicious is that you taste the terroir (as the French would say of wine, cheese and other products), that is the soil, air, plants and general characteristics of the locale where the product originates. 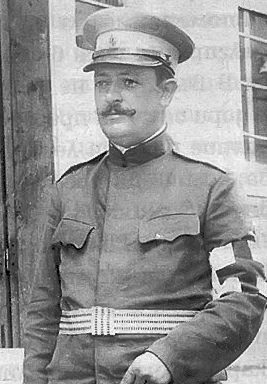 Stamen Grigorov in 1918. He served as a medical officer in the Bulgarian Army during WWI (via Wikimedia Commons).

But the cult of yogurt in Bulgaria is not just about the flavor. It is also about the health effects of its unique bacterial flora. The visit to the little museum—which stayed open just for me—revealed the details of a key chapter in the history of yogurt. The village of Studen Izvor was the hometown of Bulgarian scientist and physician, Stamen Grigorov (1878-1945) who in 1905 first discovered and viewed through a microscope the bacteria used for the fermentation of milk into yogurt. Grigorov, apparently had brought a number of ceramic urns of the “sour milk” from Bulgaria to Geneva, where he earned his PhD in medicine under famous microbiologist Dr. Léon Massol (1838–1909). With Massol’s urging Grigorov presented his findings at the famous Pasteur Institute in France in the same year. The particular variety of bacteria was named Lactobacillus bulgaricus in his honor, often followed by (Grigorov) in early scientific references. 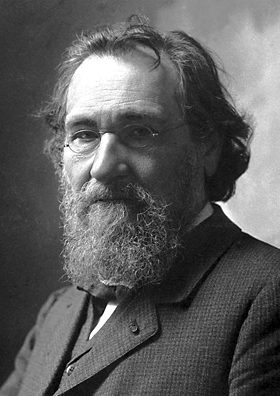 Ilya Mechnikoff in 1908 (via Wikimedia Commons).

A number of sources wrongly credit Russian immunologist Ilya Metchnikoff (1845-1916) for the discovery, as he was at the Pasteur Institute in 1905 and shared in the general enthusiasm for Grigorov’s discovery. Mechnikoff became famous for his work on immunology and aging and was awarded the Pulitzer Prize in 1908. Metchnikoff, though, was intrigued by the prevalence of centenarians in Bulgaria—people who lived to be over 100 years old—and famously linked this phenomenon to the consumption of yogurt. He is also credited with popularizing yogurt in turn of the century Europe and the US.

The process of milk fermentation originated among the Turkic herding tribes of Central Asia, who brought it to the Balkans with the Ottoman advance in the fourtheenth and fifteenth centuries. Until the twentieth century, its consumption was rather limited to the geographical extent of Turkic influence and beyond to South Asia. Grigorov’s discovery and Mechnikoff’s writings created a sensation in the growing US “health food” movement in the early twentieth century. Dr. John Harvey Kellogg—the well know vegetarian and proponent of whole grain foods—jumped on the bandwagon. Kellogg advocated the regular consumption of yogurt for cleaning your colon from the “putrefaction” caused by consumption of flesh. He also gave himself regular yogurt enemas, noting that if you “balance your intestinal flora” you will “live as long as the rugged mountain men of Bulgaria.”

I read more about Grigorov and yogurt or “kiselo mliako” (literally sour milk) after returning to Sofia. In contrast to  Mechnikoff, Grigorov, chose to live out most of his life as a country doctor in Studen Izvor, where he continued to conduct research. Grigorov is remembered by few people inside or outside of Bulgaria, but his name does come up frequently in histories of yogurt and probiotics—from Wikipedia to a plethora of books on the subject. The yogurt museum—though probably visited by few—is a monument to his name. 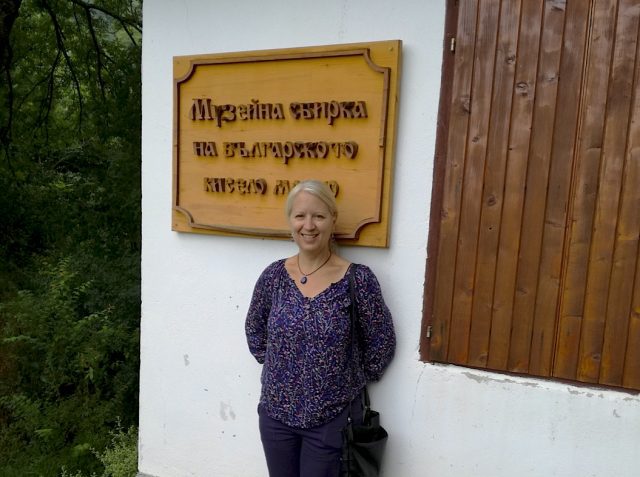 The author outside the Museum of Bulgarian Yogurt (via author).

Because I arrived late, the museum was out of the yogurt usually offered to guests for an on-site tasting. I was not disappointed, as I had come to look more than taste and there was no lack of yogurt at any and every shop or restaurant in Bulgaria. Indeed, back in Sofia, I decided to do a taste test of local yogurts sold at a specialty shop for “local and organic” dairy products. Such shops are a recent response to the inroads of companies like Dannon and the growing commercialization of dairy products in the post-socialist period. I bought three containers of plain yogurt—cow, sheep, and goat. All three were delicious with quite distinct flavors, but the sheep’s yogurt was my hands down favorite. Of course it might have been the season, the region, or who knows what else.

Read more by Mary Neuburger on Not Even Past:

On Tobacco and Smoking in Bulgaria

From Feasts to Feats (or Feet) on the Coals