The transistor is one of the most essential components of modern technology. Developed in the late 1940s and early 1950’s, this device enabled scientists to amplify and redirect electrical power, a crucial innovation in the field of electronics. Nick Walker, a student at Communication Arts High School in San Antonio, created a video for Texas History Day narrating the big history of this little device. You can watch it here. Nick describes the origins of this topic in his process paper:

“I began my research with an examination of available online resources. I trawled the films made accessible online through the Internet Archive. I searched for relevant books available from within my school district’s collections. I traveled to local higher education libraries, including those of Northwest Vista and San Antonio College, to locate more extensive resources. After reading these materials and examining their 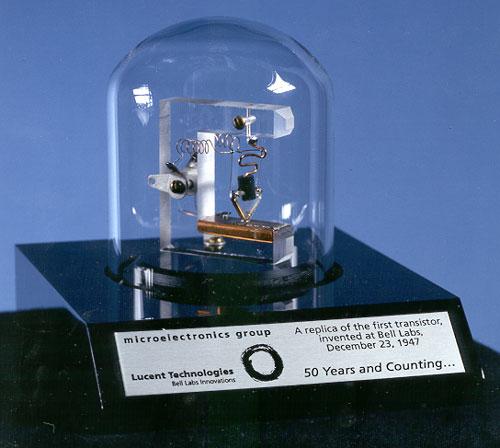 bibliographies, I conducted further research to locate copies of primary materials. I also contacted the authors for interviews and the resultant discussions would further guide my research in new directions. I was able to locate the Center for the History of Physics’ Neils Bohr Library website and its oral histories, the Computer History Museum’s Corporate Histories Collection and its numerous assorted documents, and the numerous historical films released by the American Telephone and Telegraph Corporation Archives. I accessed numerous research databases, primarily JSTOR, IEEEXplore and EBSCO Academic Complete. I contacted alumni from semiconductor firms and obtained further perspective on the industry. These discussions would lead to a final round of research at the libraries of the University of Texas at Austin and the J.J. Pickle Research Campus.”

“The invention of the transistor was a turning point. The immediately preceding research and the new insight into the nature of electrons and electricity it produced proved a key to unlocking hitherto mysterious corners of physics. The rapid pace of change that would see the advent of such phenomena as Moore’s Law, the persistent increase in circuit density, evinces an unprecedented trend of growth with implications for all of humanity. The rapid pace of iteration, over time, would see the creation of entirely new technologies that are now inescapably pervasive. These technologies have shaped the world we live in today.”

A replica of the first working transistor, which was invented in 1947 (Image courtesy of Wikimedia Commons)