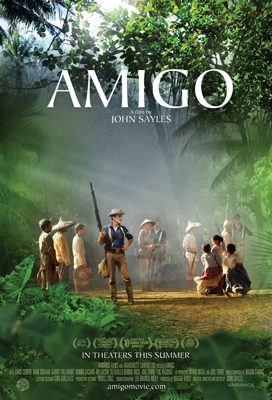 As an historian of American empire at the turn of the last century, I am constantly surprised by the number of people who have never heard that the United States annexed the Philippines at the end of the Spanish-American War in 1899.  When I tell people about my research, they often have no idea this nation was in fact a formal empire from 1899 until 1946, when the Philippines achieved independence. This ignorance, perhaps, should not be shocking.  Most textbooks and classes at the primary and secondary levels gloss over this crucial period of American history.  Our popular culture has also all but ignored the Philippines as an American colonial possession. Empire does not fit into the narrative of the United States as a land of freedom and representative democracy; thus, it is left out.  This is a disturbing omission precisely because most Americans, for better or worse, get much of their knowledge about the past from popular culture.  Throughout the twentieth century, films like Birth of a Nation, Gone With the Wind, Saving Private Ryan, The Patriot, and even Forrest Gump have shaped the way that we remember and understand our past.

Into this void steps John Sayles’ Amigo, a beautiful film about the experience of one town during the Philippine-American War.  The film opens in 1900 in San Isidro, on the island of Luzon.  The Philippines have been annexed by the United States, and the Philippine Revolutionary Army has taken up arms again to fight its new colonial master.  Rafael Dacanay (Joel Torre), the mayor of San Isidro, tries desperately to protect his town after American troops establish a garrison under the head of Lieutenant Compton (Garret Dillahunt).  With his brother, Simón (Ronnie Lazaro), fighting with the Philippine Army, Rafael must walk an increasingly impossible line between his loyalties to the nationalist cause and the need to keep the Americans happy in order to shield himself and those he loves.

In depicting an events that have been generally ignored in popular culture, Sayles takes on a herculean task. Knowing that his audience likely lacks the historical knowledge to put this film in context, Sayles keeps Amigo moving along at a brisk pace, fitting an impressive amount of information into his story.  And Sayles has clearly done his homework – there are many moments in the film that feel authentic, including the playing of “A Hot Time in the Old Town,” which, anecdotal references attest, was played so often by American troops that some Filipinos believed it to be the national anthem.

Sayles also stresses the link between the Philippine-American War and America’s previous imperial struggle – the conquest of Native American tribes on the frontier.  The last major battle of the Indian Wars was the massacre at Wounded Knee in 1890, only a decade before the United States turned its eyes toward a Pacific empire.  Sayles highlights the fact that many of the soldiers and officers fought against Native Americans in the West were later sent to fight in the Philippines.  This experience fighting on the frontier provided a lens through which the military understood their role in the islands, as shown by an early scene in the film, in which a soldier complains to Colonel Hardacre, “It’s awful hard to tell the Indians from the Amigos.”

Sayles doesn’t demonize the American soldiers, however; indeed, his portrayal is perhaps a little too sympathetic.  If the movie has a villain, it could be the Dickensian-named, hard-boiled Colonel Hardacre, who informs Lieutenant Compton that he is there “to make war on these people.” But for the most part, one is left with the impression that the soldiers and townspeople could have come together to rebuild San Isidro if they’d just been left alone by the military higher ups.  Mention is made of burning down houses, which did happen early on as a counterinsurgent technique and then later as part of a sanitation campaign against cholera, but we never see this act of violence being carried out.

The Occupation of San Isidro in Amigo

Equally absent is the violence that was directed at Filipino women during the occupation.  The sweet, awkward romance between Gil and Azalea, ignores the violence involved in many such encounters, either directly, through the raping of Filipino women, or through the coercive power of money and food on families that were desperate and starving.  This toned-down portrayal of the soldiers may have been necessary for them to be accepted as sympathetic figures – it is hard to see the humanity of a man who kills or rapes an innocent civilian.  But it ignores the abuses of power that occurred at the local level, on the initiative of individual soldiers and officers — a very real part of the true horror of war.

Also missing from the film is a sense of the varied cast of characters that would have been present during this period.  We see white American soldiers, Tagalog-speaking Filipinos, Chinese workers, and several Spaniards.  There is some mention of intermarriage between Filipinos and Chinese, and Macabebe Scouts are present in the film.  But a full sense of the utter complexity encompassed by the marker “Filipino,” is not really depicted.  Despite the real tensions between all three groups, Filipinos, Spaniards, and the Chinese had been intermarrying for generations.  And that’s not even taking into account the hundreds of different ethnic and language groups spread throughout the islands.

The movie also leaves out the fact that four regular regiments of African American soldiers were sent to the Philippines: the 9th and 10th Cavalry Regiments, and the 24th and 25th Infantry Regiments, as well as several other volunteer regiments.  These soldiers faced a difficult situation, charged with waging war on a colonized population while racial violence was on the rise at home.  The link between the oppression of African Americans and Filipinos was clear in the tendency of white soldiers to use the epithet “nigger” to refer to Filipinos as well as their black compatriots.  The 24th Infantry, moreover, participated in the capture of San Isidro in 1899, and was stationed in Nueva Ecija.  Indeed, the famed David Fagen, an African American who defected to the Philippine Army, was a member of the 24th Infantry, and operated as a leader of Filipino guerilla forces in that province until his supposed death in 1901.

Sayles is most deeply interested in the impossible situations in which the characters find themselves: the residents of San Isidro, who must negotiate between both the revolutionaries and the American military, and the soldiers themselves, who come under increased pressure to pacify the town and end the armed resistance.  This is highlighted in a scene which cuts back and forth between Lieutenant Compton reading General Order 100 and a general in the Philippine Army reading out an order from Emilio Aguinaldo, both of which threaten death as retribution for civilians caught aiding the other, aptly capturing the ultimate, bloody tragedy of war: there are no innocent bystanders, and civilians caught between two armies often suffer the greatest losses.

Despite its flaws, Amigo is a remarkable film, especially because of its focus on a Filipino character, its strong Filipino cast and the use of Tagalog for at least half of the dialogue of the film.  There have been only three other American films made to date about the Philippine-American War: The Real Glory (1939), Cavalry Command (1963), and This Bloody Blundering Business (1971), none of which used Filipino actors.

Amigo will be no blockbuster, but it ought to be required viewing for all Americans.  Not only does the film do a better job than most historical dramas in accurately depicting the past, its relevance to the present is clear.  As an historian, I sincerely hope that I am wrong, and that Amigo will garner the attention and accolades it deserves.  If it does, perhaps the next time that I explain my dissertation to a new friend, they’ll nod and say, “Oh, sure.  I know about that.”