An earlier version of this review was published on halperta.com.

Embedded in the (digital) archive are structures of power. The Native American Petitions Dataverse shifts those structures by attributing authorship to tribal and Native individuals in hundreds of colonial and early American era petitions and memorials. However, is attributing authorship the sole responsibility of those curating digital collections? And even more simply, how does one acknowledge Indigenous authorship in the colonial and early American archive? Jane Anderson addresses this in part by saying “wherein colonialism is understood as a cultural project of control, archives function as the locus for the cultural technology of rule” (234). A “decolonial” project, then, would be would offer counter-narratives to the dominant methods of organizing, the hierarchy of archival sources, and the voices represented in the colonial archive. 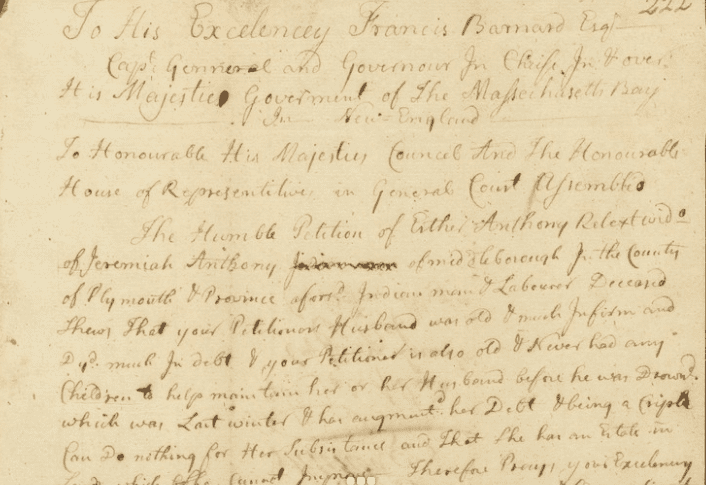 By that definition, the digital structure and content of The Native American Petitions Dataverse provide a key example of gesturing towards a decolonial project. The eighteenth and nineteenth-century petition is critical to understanding the engagement of people of color with political institutions and individuals. Much like colonial-era church attendance logs can be used to understand religiosity, petitions (and their signatures) offer a way into the areas of tension between legislators and those frustrated with legislation in the early years of the Republic. For many people excluded from suffrage, petitioning provided an almost direct line to governing bodies. Native people, in particular, used petitioning intra-tribally and externally. In the northeast, Native peoples appealed to legislative bodies for equality long before petitioning’s popularization in the abolitionist and women’s suffrage movements in the nineteenth and twentieth centuries. Collective and individual petitioning efforts are essential to nuanced tellings of Native histories, and therefore, an important area of focus for digital humanists.

The Native American Petitions Dataverse offers users direct access to high resolution digitized petitions from the Massachusetts State Archive and the National Archives and Records Administration. This project is an extension of the digitization efforts of Harvard’s Radcliffe Institute for Advanced Study and is led by head investigator and Professor of Government, Daniel Carpenter, and Tribal Archivist for the Mashpee Wampanoag Community, Stephen R. Curley. This collection hosts digitized petitions by Native individuals, groups, towns, and nations (Abenaki, Chappaquiddick, Maliseet, Mohawk, Mohegan, Nipmuc, Penobscot, Pequot, Punkapoag, Wampanoag to name a few), to the Massachusetts colonial and state officials or the General Court. It also includes petitions from non-Native peoples on behalf of or that concern Native Americans.

With a format similar to the NEH funded Antislavery Petitions Massachusetts Dataverse, of which Dr. Carpenter was also a part, this collection features 644 petitions from predominantly Indigenous townships in Massachusetts, from 1640-1870. This digitization initiative is in collaboration with the Yale Papers Project with the intention to have 4500 items digitized. More importantly, this project was planned in “consultation with and with the support of the Mashpee Wampanoag tribe, the Wampanoag Tribe of Gay Head (Aquinnah), and the Mohegan tribe, including consultation with representatives and governments of other Northeastern tribes and native communities” (Radcliffe Institute, 2016).

The interface is simple and clean, but it provides neither contextualization of individual documents nor an explanation of the significance of the practice of petitioning in the eighteenth and nineteenth centuries. Researchers, educators, and students will find the expansive nature of this collection a welcome addition to the already vast number of nineteenth-century legislative documents available online. Its contents highlight more nuanced perspectives on issues such as Indigenous territorial claims, land rights, religion, the abolition of slavery, and ideas about Indigenous communities in New England. And it puts Native voices and signatures, at the forefront.

The labor of the archivist is on full display. The methodological priorities (tagging, keywords, citation, etc.) place signers and the groups involved in petitioning efforts at the forefront of the site. In both metadata and archivist notes, The Native American Petitions Dataverse highlights Indigenous voices, by allowing users to filter petitions by keyword term, publication year, production date (year petition was signed/submitted), and geographic coverage. This reveals opportunities to restructure classic periodization and overemphasized themes in the historiography. More significantly, chosen methods of tagging and consistent categorization increase the visibility of traditionally disenfranchised figures. I am thinking particularly about Native women’s participation in petitioning campaigns and their advocacy about issues related to both individual and tribal rights.

Take, for example, the 1762 petition of Esther Anthony, a Native woman of color from the tribe of Mashpee, but living in the town of Middleborough, Massachusetts. The informational page includes several identifiers, including the total number of signatures, the extent of legislative action, the number of signatures by women of color, tribal affiliation, and additional archivist notes (i.e., widow, Jeremiah Anthony, sale, lands, payments). At the top of the page is a full citation of the original primary source along with the petition subject (which, in this case, is property) and a link to a high-resolution photograph of the petition. In the Harvard Library viewer, users can “flip” through the selected petition or browse related petitions (left of the screen) either submitted on the same date, on similar topics, or by the same petitioners as they would be organized in an archival folder. This user-friendly layout provides ample room for researchers interested in larger historical trends, genealogical networks, or public history projects. The latter opens the door to the telling of more nuanced narratives, powerful stories, specific individuals’ names, and the movement of ideas. Dr. Carpenter demonstrates one such application in a data visualization project based on the Massachusetts Antislavery Petitioning Dataverse called “Your Humble Petitioners.” This interactive map associates geographic coordinates with the locations inscribed in the metadata of the antislavery petitions. This could very easily be replicated with the Native American petitions.

The priority to distinguish Native petitions, or petitions about Native issues, commits to a partial restructuring of the power balance of the colonial archive. However, one is forced to ask whether it goes far enough. Is attribution enough? “Authorship is foundational to the organizational framework because it operates as a core node in the classification of all materials within the modern archive”(Anderson, 230). How is authorship determined? Is that the role of the archivist or the researcher? While this archive does not answer those questions, it does open up a world of research into key figures and names in the history of Indigenous petitioning efforts in the northeast and is a valuable resource to an interdisciplinary and intertribal pool of scholars. This project shows how prioritizing authorship can make room for Native voices and advocacy in the digital humanities but leaves unresolved key contextualizing details that would further illuminate the importance of this collection.

Missing Signatures: The Archives at First Glance
Cynthia Attaquin and a Wampanoag Network of Petitioners
The Public Archive: Woven Into History