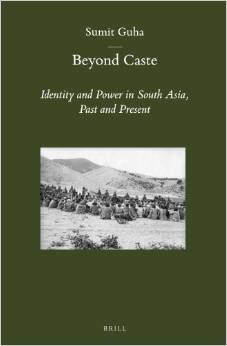 It may sound strange to many readers, but when I was growing up as the son of upper middle-class civil servants in India in the 1960s, I was hardly aware of the existence of caste distinctions. We had returned from Italy in 1963 and I went to a private, Anglophone school whose privileged students belonged (I now realize) to various religions and castes. But at that time I was hardly aware of this. I now realize this arose from a conscious effort on the part of many of the Indian middle class of that era to shake off deep-rooted distinctions in order to build a new national community without invidious distinctions. On the other hand, our own class privilege by contrast to the acutely visible poverty of many around us could not escape my attention. When I enrolled in the University in the 1970s, the reduction or elimination of economic inequality was the issue that most agitated thinking people and the sources of class hierarchy was what preoccupied historians. Caste or religious distinctions – in so far as they were examined, were thought to be relics or survivals of a bygone social order or stratagems to divide working people in order to facilitate their exploitation.

This strain of thought dominated Indian intellectual life until the late 1980s and was undermined by three historical developments. One was the evident maintenance of social distinctions such as caste even as modernization broke down older taboos. It was clear that these were more than vanishing relics of a bygone era. Secondly, the collapse of the Soviet bloc alongside the astonishingly rapid and successful adoption of capitalist markets in China – the country that had gone furthest in suppressing markets and private property, demonstrated that the dominant Marxist ideas did not measure up to historical reality. Finally, in the 1990s, Indian politics was dramatically altered by the rise of caste-based political parties that eclipsed class-based organizations in elections, both in the States and the (federal) Center.

A number of scholars and commentators now turned to the West to understand these phenomena and found two related sets of ideas at hand. One was that caste was based on a religious ideology descended from ancient times (many added a racial dimension to it.) The other was that communities that lived distinct from the Hindu caste order were surviving aboriginal peoples, analogous to the indigenous peoples of the Americas and Australia. I found both these ideas unsatisfactory if measured against historical evidence. I began by studying “tribal” or “aboriginal” peoples, the results of which I published in 1999 as Environment and Ethnicity in India c.1200-1999. This book showed how tribal communities were in fact shaped by ecological settings and political networks (something that researchers were establishing for the native peoples of the Americas too.)

That book led me to explore the work Fredrik Barth, a famous expert on the Afghan borderlands who did path-breaking work across Southwest Asia starting in the 1950s. A little-read but brilliant essay of his showed how a caste system – marked by occupational segregation and social exclusion — functioned for century in the Swat valley of what is today northern Pakistan even though the population was 99% Muslim. He showed how this served the interests of the dominant landowning class even though it had no religious sanction. I also went back to a book published by the Cambridge anthropologist Susan Bayly in 1989 where she showed how Christian communities in South India – converted centuries ago — still maintained caste exclusions into the twentieth century. I also found studies showing caste practices among Indian Muslims.

A little research uncovered the fact that the very word “caste” was not found in any Indian language. It was spread world-wide by the Spanish and Portuguese empires of the sixteenth century. They applied the concept of “caste” to various ranked ethnic groups in Spanish Mexico and to various communities the Portuguese encountered in India. Thus the viceroy in India wrote to the King of Spain in 1630 that he had met the Mughal officer Daulat Khan (a Muslim name) who was of the “casta Abexim” or Abyssinian caste. But the Iberian peoples had a racial or genetic idea of caste while Indian society thought more in terms of behavior and purity. Racial caste can never be gained or lost: but Indian society admitted temporary exclusion and readmission as well as permanent expulsion. But branco or mestic̨o were permanent categories like white or black in the United States. In the 1930s and 1940s, a number of sociologists pointed to aspects of U.S. society that could be analyzed in terms of a caste structure.

Finally, I found historical studies of the practice of caste in Sri Lanka, a mainly Buddhist country. Quite amazingly, the Dutch who ruled much of the island before the British captured it from them in 1796 regulated and enforced the caste system there. This was not because the Dutch Reformed Church prescribed it: rather, it was because they exacted taxes and forced labor from their subjects on the basis of their caste occupations such as cinnamon peeler, rice farmer, carpenter etc. None of these obviously could be thought of as the results of a religious ideology like Hinduism. 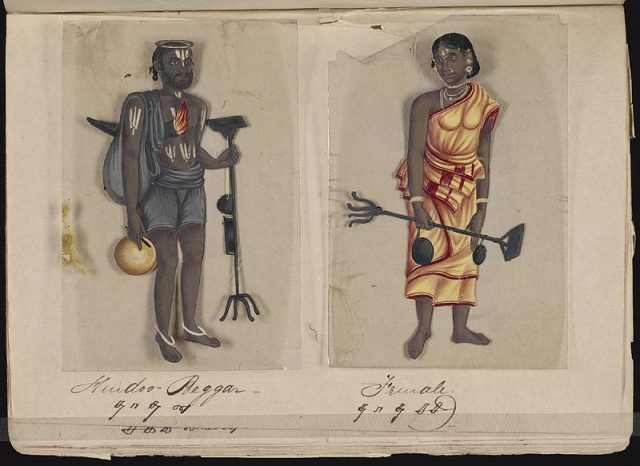 A page from the manuscript “Seventy-two Specimens of Castes in India,” an album compiled by the Indian writing master at an English school established by American missionaries in Madura, and given to the Reverend William Twining. Each illustrated portrait is captioned in English and in Tamil, and the title page of the work includes English, Tamil, and Telugu. (Via Wikimedia)

It became clear that modern states and social and political interests played a major part in the reproduction of caste structures. In India, caste identity worked to mobilize voters. But this modern form of identity broke free from older taboos such as touching or eating beef. A graphic example came to mind: some time in the early 1980s, some shrewd if unscrupulous merchants began marketing an exceptionally cheap margarine (hydrogenated vegetable oil) in North India. Millions bought cans of this useful cooking fat. Then it came to light that the vendors had bought low-cost beef tallow on the world market, imported it under the pretext of soap-making and then sold it to millions of unsuspecting Hindus as a pure vegetarian product. There was a media furor for a few months, warehouses were sealed, the firm prosecuted and then everyone forgot about the fact that untold millions had ingested the fat of a sacred animal. Millions did not rush to seek penances and purifications. In 1857, the mere rumor that Indian soldiers were to be issued ammunition greased with pork and cow fat had driven tens of thousands of them into a desperate rebellion where vast numbers perished. In the 1980s, there was barely a ripple. Yet this was supposed to be a society (if the “religious” theories of caste discrimination were true) that held religious purity as its highest value and organized its economic and social life accordingly. Even if food taboos had fallen however, social discrimination and resentment persisted. Caste-based or ethnic political parties have won large votes in the elections year after year. No mainstream political party can now ignore the caste, religious, or linguistic affiliation of the voters in the constituencies where it is running.

So how then can we understand the long life of “caste”? I suggest that we stop looking at the many different classifications in human society and instead focus on what is common to tribes, ethnic groups, racial groups and castes: they are “bounded communities” and they all distinguish their members from those of other communities or ethnic groups.. Understanding begins by looking at how membership is decided: who gets in the club? Who is kicked out? Clubs admit members on many different criteria – what is important is that they all have ‘boundaries’ determined by rules of membership. Let me end with a provocative quote from Fredrik Barth: we should study “the ethnic boundary that defines the group, not the cultural stuff that it encloses.”

Sumit Guha, Beyond Caste: Identity and Power in South Asia

For more reading on this subject: More to Read on Caste and South Asia

Index to more articles on South Asia on Not Even Past

First image: “Goa,” in Jan Huygen van Linschoten, Itinerario, voyage ofte schipvaert, van Ian Huygen van Linschoten naer Oost ofte Portugaels Indien, Amsterdam, 1596. Courtesy of the John Carter Brown Library at Brown University.
It is reproduced in the online exhibition of the JCB Library, “Portuguese Overseas Travels and European Readers,” which includes, among many interesting annotated images, the following text concerning this image:
The Dutch traveler Jan Huygen van Linschoten (1562-1611) lived in Goa on the west coast of India between 1583 and 1588, where he acted as secretary to the Portuguese archbishop Dom Vicente da Fonseca. After he returned to the Low Countries, in 1592 he collaborated with the Dutch scholar, Berent ten Broecke (also known as Bernardus Paludanus), to write a series of accounts of the Indies using his vast first-hand experience as well as a number of Iberian maps, books, and manuscripts he had collected during his travels. All of Linschoten’s works circulated widely and were repeatedly reissued and translated in Europe, but the most famous is the celebrated Itinerario, first published in 1596. It describes all of maritime Asia from Mozambique to Japan and is illustrated by three maps and thirty-six colored engravings made from original drawings by Linschoten. The one shown here, depicting the rua direita of Goa, is one of the most interesting and well-known engravings of the series.