Austin’s moonlight towers have long been a distinctive part of the city’s landscape, their lights casting a gentle glow on the streets 150 feet below.* Though Austin’s fifteen surviving towers are now the last of their kind, this form of street lighting was once common across the United States. Many cities erected tower lights in the 1880s and 1890s, and Austin’s system was modeled closely on Detroit’s, then the most extensive in the world.**

The first practical source of electric light was essentially a sustained spark, or arc, between two carbon rods.  Though highly efficient, such arc lights had a serious drawback: their glare was too intense to be endured at close range, yet there was no way to make the arc smaller without extinguishing it altogether.   The carbon rods also burned down quickly; those in the first arc lights lasted just an hour or two before they had to be replaced, though later models could last through the night. 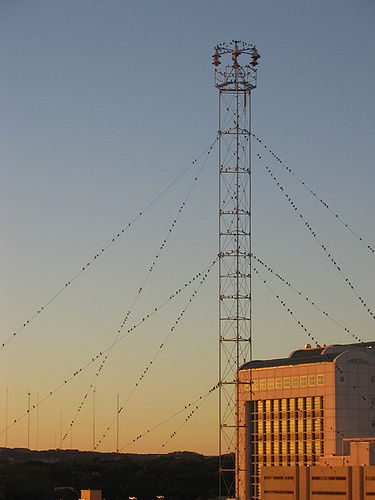 Paris and other European cities began mounting arc lights on ordinary streetlight poles in the late 1870s, but the shielding required to reduce the glare meant that much of their light was wasted.  Boosters in San Jose, California, tried to solve the problem in 1881 by putting the arc lights atop a 237 foot tall tower that straddled a main intersection.  Although it never really lit up the whole city as initially hoped, and climbing up to change the rods was a challenge, the San Jose tower inspired others (including, some said, the builders of the Eiffel Tower), and more practical lighting towers, most 100 to 180 feet tall, soon went up in other American cities. Detroit erected over a hundred such towers in the 1880s and in 1894 Austin purchased thirty-one new towers of its own from the Fort Wayne Electric Company.**

In the 1890s Austin was in the middle of an electrical boom.  Hoping to spur industrial development, the city built an expensive granite dam across the Colorado River (where Tom Miller Dam now sits), to provide power for new cotton mills.  Though the mills never materialized, dynamos installed in the dam’s powerhouse supplied current for an electric streetcar system, a municipal electric utility, and the new moonlight towers.

The first tower was lit in May 1895 in the heart of Hyde Park, a “streetcar suburb” then on the north edge of town, and the other towers were lit soon afterward.  The dam collapsed in a flood in 1900, and Austin’s dreams of economic development went with it.  But the city-owned electric utility survived, and while Detroit and other cities abandoned their arc light towers in the 1910s in favor of simpler street-level incandescent lights, Austin stuck with its moonlight towers long enough for them to become much-loved curiosities.

In the 1920s the city replaced the arc lights atop the towers with dimmer but less troublesome incandescent bulbs. In 1936 these gave way to mercury vapor lamps, and later to the metal-halide bulbs that are still used on most of the towers today, though they are gradually being replaced with new LED bulbs — all brighter than the old incandescent bulbs, but no match for the original arc lights.**

About half of the original thirty-one towers have come down over the years, and several have been relocated; two that were recently removed to make way for downtown construction are now awaiting new homes.  Since 1976, all have been listed in the National Register of Historic Places.

The spread of artificial lighting in the nineteenth century had enormous effects on modern life, a story well told by Wolfgang Schivelbusch in Disenchanted Night: The Industrialization of Light in the Nineteenth Century.  When Schivelbusch visited Austin in 2007, he met with my undergraduate seminar on the history of electric technology and its social impacts, and we walked over to look at the moonlight tower at 22nd and Nueces Street.  Schivelbusch was, he said, very glad to see that this piece of electrical history was still standing over Austin’s streets.

*corrected Tuesday, November 12, 2013, with updated information about the remodeling done in the 1990s.
**corrected Tuesday, September 20, 2016, with updated information about the addition of LED bulbs to Austin’s bulb replacement project and with new information about the purchase of the original towers. Although numerous sources reported that Austin bought its towers second-hand from Detroit, Catherine Cordeiro, a graduate student in the UT Austin School of Architecture’s Historic Preservation program, discovered that Austin bought its towers new from the Fort Wayne Electric Company, and they were slightly improved over the type sold a few years earlier to Detroit.