After World War II, American Jewish history emerged as a significant field of study. Historian Hasia Diner has argued that the subfield actually began to emerge as early 1892, but if we consider pioneering texts about Jews composed by American writers during the nineteenth century, the work of Hannah Adams suggests that it began far earlier.  A Christian, Adams discussed Judaism in two works, The History of the Jews, From the Destruction of Jerusalem to the Present Day (1812) and A Dictionary of All Religions and Religious Denominations: Jewish, Heathen, Mahometan, Christian, Ancient and Modern (1817). Adams’ work is largely disregarded by contemporary American Jewish historians, who are skeptical of her motives as a Jewish historian, in part because she was a founder of the 1815 Female Society of Boston and the Vicinity for Promoting Christianity. Historians such as Howard Sachar, Arthur Hertzberg, and Leonard Dinnerstein suspected that if her goal was to convert Jews, her scholarship could not be trusted. Sachar and Dinnerstein are especially critical of Adams because they feel it was a reflection of America’s “fascination” with the Jewish rejection and supposed murder of Christ. Hertzberg recognized that Adams genuinely wanted American Jews to have equal rights in early nineteenth-century America, but like many other historians, he does not want to accord Adams the status of Jewish historian. In 1963 Salo Baron and Joseph L. Blau, were the first scholars to recognize Adams for publishing “the most useful contemporary general review of the position of the Jews in America,” but they too dismiss her Dictionary for having “only a superficial acquaintance with its subject.” 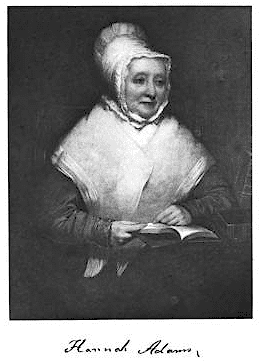 Jewish historians may have perceived Adams’ work as lacking substance, but a close examination of her work shows that she did indeed offer a valuable overview of what was known in the early nineteenth century about the Jewish religion in America and perceptions of early American Jewry.  In the newly revised “Introduction” to Adams’ Dictionary, Thomas Tweed argues that “even though Adams clearly favored Christianity, she did not merely separate religions and sects into the true and false.” Tweed proposes that scholars consider the  period in which Adams lived — a time when American Jews comprised less than one percent of the population (around 2,500). The first Rabbinical school had yet to be founded, Hebrew Schools had not been instituted, and there were no Jewish newspapers in the United States. Unlike in Europe, the U.S. had not undergone a Jewish Enlightenment — that is, a time promoting the academic study of Judaism. In this new “Christian nation,” Jews were seen as mysterious and were vilified for their rejection of Christ and their ancestors’ supposed role in Christ’s death. In this religious climate, Adams’ contribution to Jewish history, even while writing as a Christian in a Christian population, was innovative and significant. Adams’ discussion of Jews in her Dictionary initiated the study of Judaism in America even before Isaac Leeser published his English translation of the Hebrew Bible in 1853. 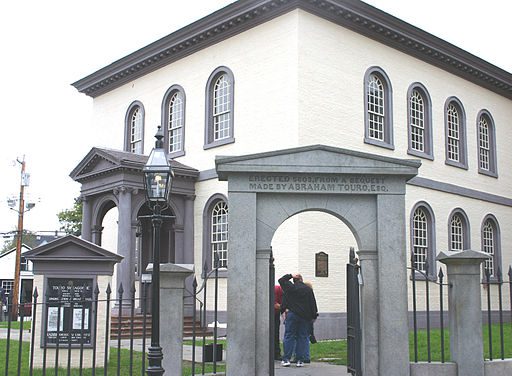 Touro Synagogue, Newport, RI. Oldest synagogue in the US still in use (Wikimedia)

Adams began her account by chronicling the history of Jews under Roman rule — namely, during the time of Christ.  Adams could have used the New Testament as her only source, but instead she referred to the findings of ancient Jewish historian Titus Flavius Josephus to explore the complex historical position that Jews occupied in the Roman Empire.  Jews were able to govern themselves, but at the same time they were forced to adapt to both oppressive Roman rule and Jewish leaders like Herod who did not represent Judaism. By pausing to explain this early history, Adams was able to convey how the Jewish position during the time of Christ was more complex than that pictured in the New Testament — a move that arguably dismantled the inflammatory image of Jews as Christ-killers. 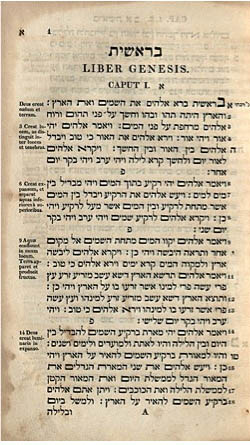 First Hebrew Bible pulished in the US, 1814 (Library of Congress)

At the same time, her definitions provided insight into the Jewish religion to an otherwise uninformed American audience. For instance, her definition of “Cabbalists” (Kabbalah) discussed its connection to occultism, but also explored the Kabbalah as a methodological tool used to provide a higher level of interpretation of the Torah: “Jews extract recondite meanings from the words of scripture.” She traced the origins of the Kabbalah to the Oral Law, which enabled her to articulate the difference between the Torah (“written law”) and the Talmud (“oral law”).  It is also interesting to note how Adams acknowledged the various terms associated with Jews, such as “Hebrews” and “Pharisees.” In her definition of the former, Adams made the radical move of explaining how the Apostle Paul was Jewish, thereby contextualizing Christianity’s Jewish roots.  Her definition of “Pharisees” is of equal interest. Considering that the English vernacular uses Pharisees to mean “hypocrites,” and that the New Testament monolithically portrays them as the main opposition to Christ, Adams discussed their role as “celebrated” Jewish lawmakers who were devoted to preserving the law before, during, and after Christ. By providing a fuller picture of ancient Jews like the Pharisees, Adams provided an alternative perspective on Judaism’s historical legacy to a Christian-centric country.

Adams’ pivotal definition of “Judaism” was multifaceted, drawing attention to various aspects of Judaism.  Paraphrasing the “Thirteen Principles” of Maimonides (1138-1204) — one of the most influential Jewish scholars — Adams explored Jewish prayers and kosher practices, showing their roots in the Talmud. Her insights demonstrated to a Christian-centric audience how complex and sophisticated Judaism was.  Moreover, she did not refrain from describing in horrifying detail Jewish persecution by Christians throughout the ages: “[I]n Christendom, [Jews] have been despised, calumniated, oppressed, banished, executed, and burned.” By accusing her own religion of Jewish persecution, Adams not only historically anticipated America’s position as a future bastion of Jewish freedom, but helped to legitimize a marginalized faith. 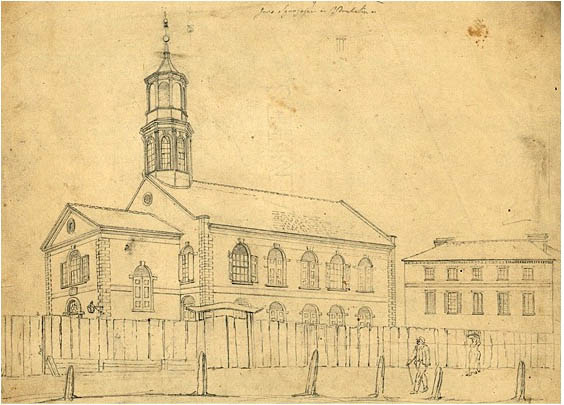 First synagogue in the US (Charleston, SC) by John Rubens Smith, 1813

Adams’ History of the Jews predominately discussed Jewish experiences in the ancient world and in modern Europe, but towards the end of the book Adams briefly discussed the experiences of early American Jews. Significantly, Adams’ study precedes the two waves of Jewish immigration from Germany and Eastern Europe, which would eventually increase the population of American Jews from mere thousands to over a million. Remarkably, Adams was able to determine that the first wave of Jewish immigrants consisted of “Spanish Jews” — Sephardic Jews — who had emigrated because of the Spanish Inquisition. Though Adams recognized this as the starting point of the Jewish community in America, she determined that Jewish involvement with the Dutch East India Company was the pivotal point of the Jewish community’s arrival in the United States. Adams made the historically significant point that the Dutch East India Company was the first to allow Jews to remain in America.

Aware that she was an outsider to the Jewish faith, Adams understood that she needed to look outside of her own environment in order to complete her history of American Jews.  In History of the Jews, her readers must have appreciated the manner in which she conducted research on religious practices, on family, and on social life in various Jewish communities (Charleston, New York, and Philadelphia). In Adams’ footnotes, she made a point of acknowledging how prominent Jewish figures like Rabbi Seixas had provided her with the information to give her readers the most complete perspective possible for her history of Jews in America.  The neglected Adams was not just a scholar, but a pioneer and forward thinker.

In sum, both Adams’ Dictionary and History of the Jews are significant contributions to the study of American Jewish history. The Dictionary presented insight into Jewish religious practices, while The History of the Jews offered its audience an early glimpse of Jewish American history. Though Adams’ perspective was biased because of her Christian beliefs, she deserves to be recognized for enabling us to more thoroughly understand the Jewish position in early American history.

Allison Schottenstein won the Perry Prize for the best Master’s Thesis in 2012. An abstract of her thesis can be found here.

David Crew’s review of Saul Friedlander’s major book on the Holocaust can be found on NEP here and his article about wedding photographs from the Nazi imposed ghettos can be found here.

Miriam Bodian writes about an unusual Jew interrogated during the Inquisition, in “A Dangerous Idea”

Historians mentioned in this article: