(This is the first of two articles on a post-custodial digital archiving project being carried out by a group of researchers and archivists from UT Austin’s LLILAS Benson Latin American Studies and Collections together with their colleagues in the Ribeira Valley in Brazil.)

The author dedicates this essay to anti-dam activists on this International Day of Struggle Against Dams (March 14) and to the memory of human rights activist and Rio de Janeiro city councilwoman Marielle Franco, who was assassinated on March 14, 2018

Before dawn on March 14, 2015, I stood against a flickering street lamp at a bus station in the central square of Eldorado Paulista, a frontier outpost in the heartland of Brazil’s Ribeira Valley. Eldorado was the epicenter of a seventeenth-century gold rush that brought the first waves of enslaved West African peoples to São Paulo. With a population of 15,000, the town is hardly known for its raucous nightlife. Yet the thumping bass of baile funk music drowned out the twice-hourly chimes of church bells as young people congregated at an empty gas station to dance and to drink beer. I didn’t travel to Eldorado to party (although I can recommend a few local botecos). That morning, I was waiting for a ride to Adrianópolis, a mining town across the state border in Paraná, where I planned to interview quilombola activists at a demonstration commemorating the National Day of Mobilization Against Dams.

Just after 3 am, José “Zé” Rodrigues, an activist from Ivaporunduva, São Paulo’s oldest quilombo community, pulled up in a grey 15-passenger van.

“Did you have a good time?” he smiled, pointing to the crushed beer cans at my feet.

Under a pitch black sky, we sped along SP State Road 165 into the heart of the Atlantic Forest, stopping at a dozen quilombos along the way to pick up other passengers. I had hoped to catch a few hours of sleep during the five-hour drive to Adrianópolis. But I couldn’t sleep as the activists next to me told jokes, stories, and legends of more than 200 years of struggle for land, citizenship, and racial equality.

During the nineteenth century, the Ribeira Valley served as a hotbed of resistance in the world’s largest and longest-lasting slave society. Rebel slaves escaped the gold mines and rice plantations that dotted the landscape of Eldorado, joining scores of maroon communities of fugitive slaves, known in Portuguese as “quilombos.” The Atlantic Forest provided safe haven to runaways like Gregório Marinho, Bernardo Furquim, and Rosa Machado, who raised farming and fishing villages near the shores of the mighty Ribeira de Iguape River. Many of these quilombos, such as Ivaporunduva, São Pedro, and Pedro Cubas, still exist today. Their survival is in part the result of geographic isolation and territorial mastery. Yet it also derives from the fact that since the nineteenth century, quilombolas and their descendants have drawn on history, ecology, and the law to challenge the efforts of governments and elites to dispossess them. The quilombos’ endurance is a testament to their long history of activism and resistance. 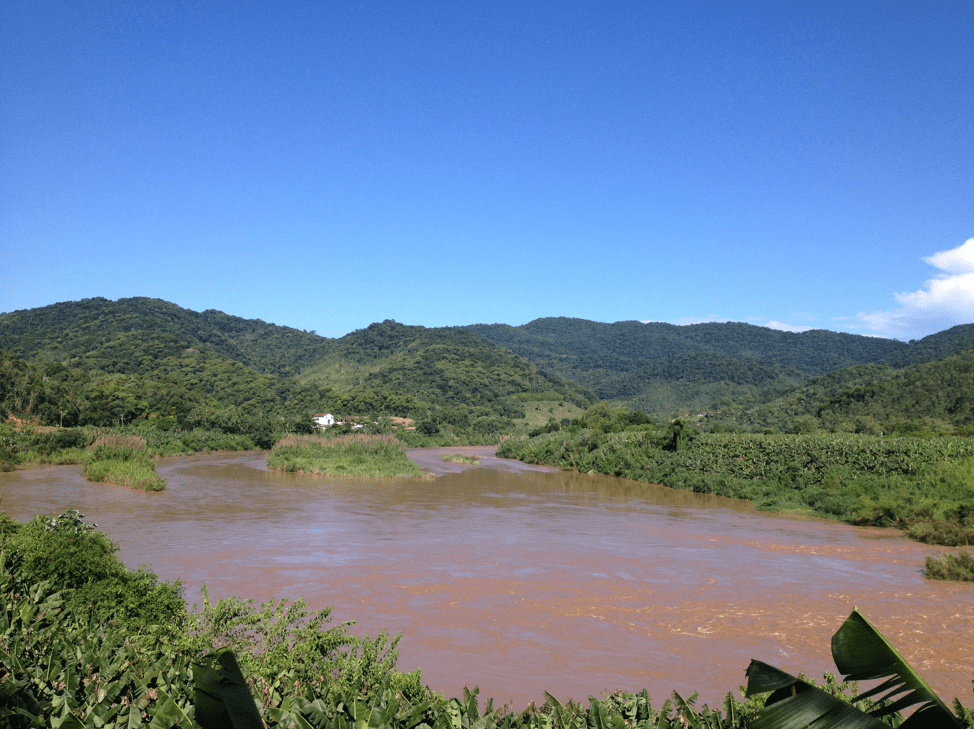 Quilombo Ivaporunduva in the Ribeira Valley, São Paulo. Photo by the author.

Throughout the twentieth century, quilombos confronted an onslaught of government projects to colonize the Ribeira Valley, the final frontier of Brazil’s most heavily industrialized state. The arrival of cattle ranchers, banana farmers, and mining companies led to violent clashes with small farmers, including quilombolas. In 1982, Carlitos da Silva, a rural activist from Quilombo São Pedro, was assassinated after standing up to a local rancher. The creation of state parks and enactment of environmental restrictions on subsistence farming in the Atlantic Forest also posed challenges to maroon descendants, whose livelihoods came under increasing attack. In 1988, the proposed construction of four hydroelectric dams threatened to flood 11,000 hectares of rainforest and submerge several dozen quilombos. But residents fought back.

During the 1990s, quilombolas gained the support of new allies who backed their struggle against the dams. Maria Sueli Berlanga and Ângela Biagioni, Sisters of Jesus the Good Shepherd nuns, founded MOAB (Movement of those Threatened by Dams) in Eldorado. Espousing the tenets of Liberation Theology, MOAB helped to organize rural black communities in opposition to the dams while pursuing legal action against cement giant Votorantim, the corporation behind the dam proposal. In 1988, on the centenary of abolition in Brazil, farmers and fishermen throughout the Ribeira Valley invoked Article 68, a constitutional provision that accorded land rights to remanescentes de quilombos or “maroon descendants.” In 1994, Ivaporunduva became the first quilombo to sue the Brazilian government for its failure to enforce Article 68. Under significant pressure from rural activists and the Catholic Church, the administration of President Fernando Henrique Cardoso finally bestowed a collective land deed to residents of Ivaporunduva. But the threat of the dams, mining companies, and land colonization still remained. Ever since, quilombolas of the Ribeira Valley have staged demonstrations on March 14 to demand land rights and an end to developmentalist projects. 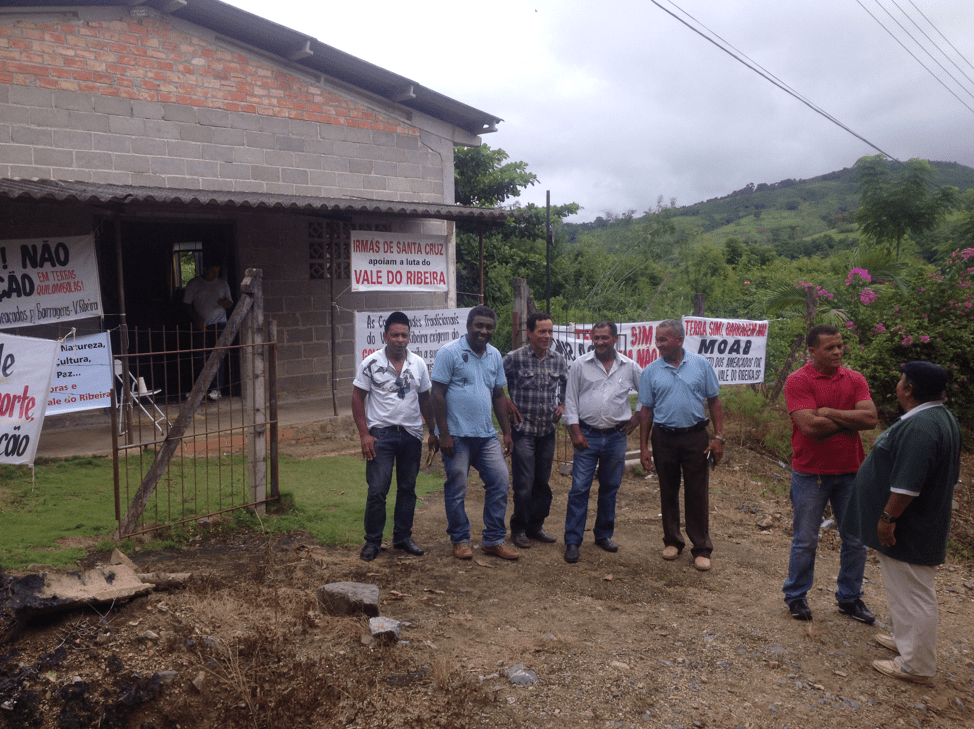 Quilombola activists gather in Adrianópolis, Paraná, to protest developmentalist projects in the Ribeira Valley. March 14, 2015. Photo by the author.

At 8 am, we crossed the Ribeira de Iguape River by ferry, driving another fifteen kilometers until we arrived at a hillside village overlooking Adrianópolis. A delegation from Quilombo Córrego do Franco, Paraná, greeted us as we filed into a one-room schoolhouse for a town hall meeting. The giddy atmosphere of our delirious jaunt through the emerald mountains of the Upper Ribeira turned somber as activists spoke about the challenges confronting their communities.

Sr. Nilton Morato dos Santos of Córrego do Franco decried the devastating effects of lead mining, which has poisoned ground water, killed livestock, and contributed to alarming rates of cancer in Adrianópolis.

Of the more than six-thousand quilombos that have petitioned for territorial rights in accordance with Article 68, only fifteen communities possess full titles to their ancestral lands.

At this rate, it will take the Brazilian government more than a millennium to issue land deeds to eligible communities, according to a recent study by the Comissão Pró-Índio.

Finally, Sister Maria Sueli Berlanga, co-founder of MOAB (today known by the acronym “EAACONE,” the Articulation and Advisory Team to Black Communities of the Vale do Ribeira), addressed the crowd. 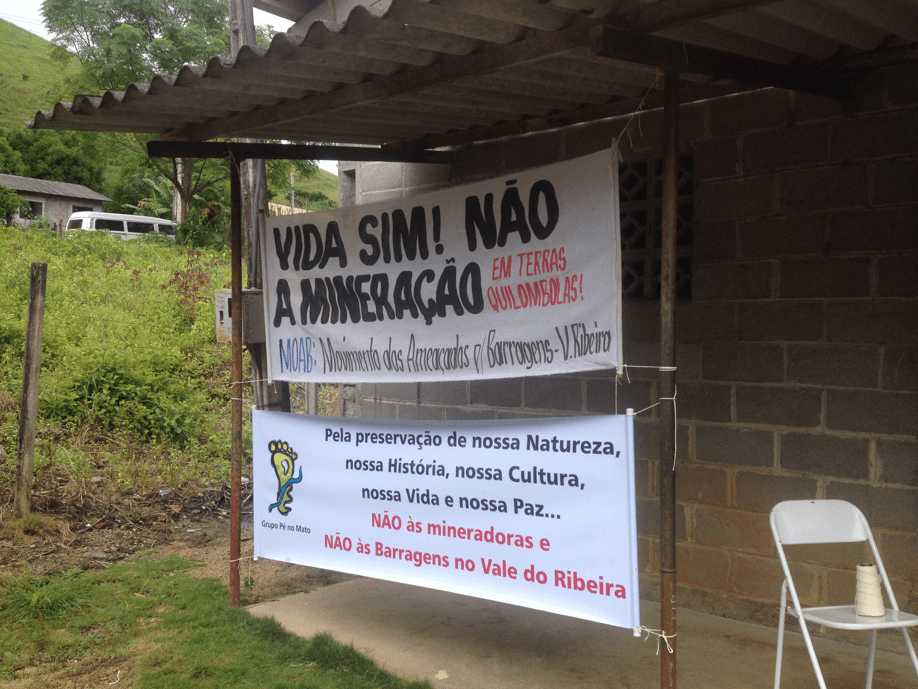 MOAB banners commemorating National Day of Mobilization Against Dams. The first sign reads, “Yes to life! No to mining on quilombola lands!” The second sign reads, “For the preservation of our Environment, our History, our Culture, our Lives, and our Peace…[We say] no to mining companies! [We say] no to Dams in the Ribeira Valley!” Photo by the author.

I first traveled to the Ribeira Valley four years ago to carry out field work for my dissertation. But I discovered so much more: purpose, solidarity, and a remarkable history of resistance to slavery, capitalist exploitation, and environmental degradation. In addition to participant observation research and ethnography, I conducted extensive archival research at EAACONE’s field office in Eldorado. This extraordinary collection—spanning over two hundred years and containing newspaper clippings, photographs, film, correspondence, legal documents, and property deeds—demonstrates how runaway slaves and their descendants used historical memory and legal claims predating abolition to challenge territorial dispossession decades prior to the enactment of Article 68. In addition to demonstrating a historical agency that is often overlooked, the archive challenges the allegations of Article 68’s opponents, who have attempted to discredit remanescentes de quilombos by dismissing their territorial claims as the fabrication of outside agitators. In the coming weeks, I am planning to blog about my recent experiences working with LLILAS Benson archivists and EAACONE to create a post-custodial digital repository of the histories and legacies of quilombos, while considering the implications of this project for historical research and human rights in Brazil.

An Anticipated Tragedy
Seth Garfield on the Brazilian Amazon
Law of Chance: Brazil’s Clandestine Lottery and the Making of Urban Public Life

Other Articles by Edward Shore: