Browsing through the online finding aids for the Dolph Briscoe Center for American History, I was stunned to discover that they housed an original copy of a 1939 newspaper from Hebbronville, my hometown in South Texas. The curiosity quickly got the better of me and I was at the repository the next day calling up this item. Two thoughts running ran through my mind: “How funny that it ended up here” and “What is so special about March 9, 1939?”

The archivist brought me a larger than usual box that held newspapers from towns all across Texas beginning with the letter “H.” The archivist looked at the box, said “Good luck,” and left me to my searching. To my delight and relief, the newspaper I was looking for sat at the top of the pile, bound in its own cover.

I soon found what made this issue of the newspaper so unique. The March 9, 1939 issue of the Jim Hogg County Enterprise was the “Silver Anniversary Edition,” commemorating the twenty-fifth anniversary of the county. The anniversary issue is compiled of articles ranging from brief histories of the local churches and schools to the railroad’s impact on the town, but section two had something that caught my attention. 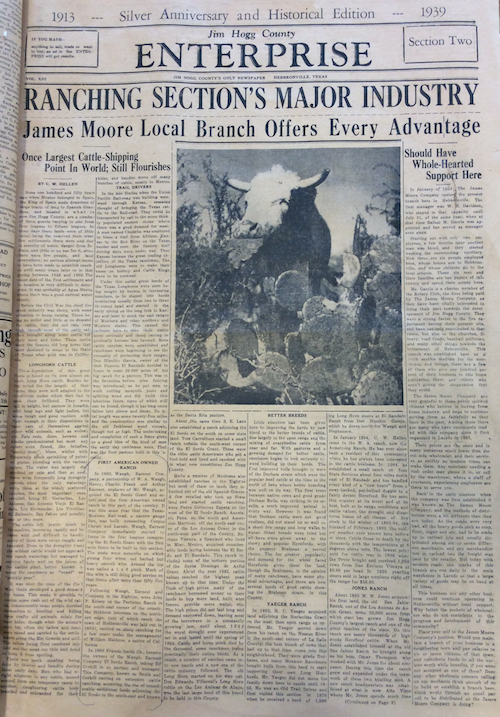 During Jim Hogg County’s now more than 100-year existence, the ranching industry has played a prominent role, economically and socially. Featured on the front page of the second section of the Enterprise was a detailed article about the industry’s place within the area. The headlines are stacked upon each other, perhaps to grab the reader’s attention and preview the two main articles on the page. The only other element on the page is a photograph of a bull surrounded by mesquite trees and chomping on some cactus. The front page of this newspaper boasted that it was the largest edition to ever be printed in the county and the ranching industry’s highlight within it underlines its importance in the community.

The industry had notable involvement within the economic structure of the county, as well as Hebbronville, the county seat. This is evident by the headline “Once Largest Cattle-Shipping Point In World; Still Flourishes.” Though some historians argue the cattle boom ended by 1900, almost forty years later, it was still a viable way of life in Jim Hogg County. 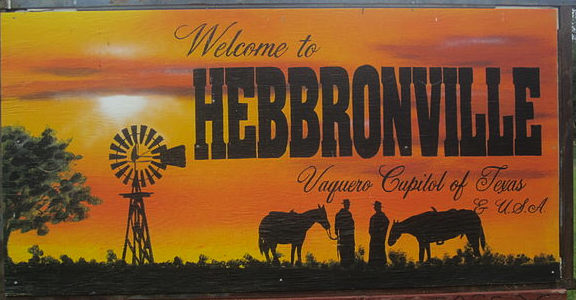 Welcome sign for Hebbronville, ‘The Vaquero Capitol of Texas and the USA.’ Photo from 2011. Via Wikipedia.

It is interesting that the sub-articles in the section are solely about ranches owned and operated by Anglos, not the Hispanic workforce, which made up the majority of the population of Jim Hogg County. The Yaeger and Jones Ranches are specifically mentioned, as are their owners H.C. Yaeger and W.W. Jones. Both men acquired land to build their ranches from previous Mexican land grants in the area. These men, one could say, were the examples to men like Hellen who later followed in their footsteps, moving south and establishing ranches for the profitable business of raising cattle. The only Hispanic mentioned in these articles is Don Hipolito Garcia, the original inhabitant of this area.

These men profited from the cattle industry and breeds of cattle that descended from the longhorn. The article recounts the rise of longhorn drives to Kansas and the shift away from sheep raising, giving a sense of the economy before the introduction of the now famous cattle drives. Though almost synonymous with South Texas, the longhorn was not always the most prominent livestock of the area.

The only photograph featured on the page tells us a lot about the environment of area. It is mostly arid. Cactus and mesquite are common due to their ability to withstand little, if any, rainfall. The bull, marked by its horns, is another common sight. Obviously, the cattle industry relied on the animal pictured and it is not surprising that they used this image.

Unfortunately, the Briscoe does not keep record of who donates original newspapers, as they do with more formal collections. Unlike a collection, where it can be further analyzed by researching the donor, I may never find out why a newspaper from a small South Texas town ended up here. It would be interesting to know who thought this newspaper had value to archive it. Being a historian in a digital age definitely has its benefits. Though the newspaper is not digitized, the internet still led me to a great archival find.

More digitized Texas newspapers can be found in The Portal to Texas History.

“Mapping Texts,” a collaboration between the University of North Texas and Stanford University, offers tools for advanced searching and analyzing newspapers in the collection.

For more on the ranching industry in South Texas a few notable books are worth mentioning: