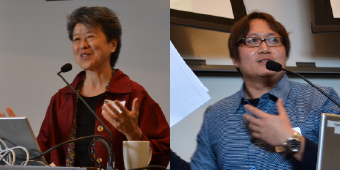 Scholars, students, and guests from Hong Kong, Taiwan, England, the US, and Canada gathered at the University of Texas last week to attend the “Transpacific China in the Cold War” conference hosted by the Institute for Historical Studies. Randy Diehl, the Dean of Liberal Arts at UT, opened the conference and highlighted its interdisciplinarity, saying “This kind of work excites me.  I think that some of the best work being done in academia is in the interstitial spaces addressed in this kind of conference.”

The two-day conference highlighted new research focusing on the cultural and social productions that emerged from diasporic Chinese communities during the Cold War. Madeline Hsu, Associate Professor of History at UT and the Director of the Center for Asian American Studies, organized the conference with Poshek Fu, Professor of History and Asian American Studies at the University of Illinois at Urbana-Champaign and Zijiang Professor of Humanities at the East China Normal University in Shanghai, and Hon Ming Yip, Professor and Chair of the History Department at The Chinese University of Hong Kong. Professor Hsu remarked in her opening comments that this conference was particularly significant because it painted a “more complicated picture of the various struggles to assert identity and belonging during the Cold War.  In these struggles, Great Power conflicts shaped but did not determine intellectual formations and pursuits of belonging by Chinese communities.”

In the first session of the conference, entitled “Orphans of Empire: Refugees,” the panelists explored questions affecting Chinese refugees during the Cold War, an issue often overlooked by diplomatic historians. Helen Zia, a journalist who was one of the first American travelers to the People’s Republic after Richard Nixon’s historic visit in 1972, discussed the mass exodus from Shanghai on the eve of the communist “liberation,” while Glen Peterson (UBC) examined the politics surrounding the Chinese refugees in Hong Kong after the communist takeover of the mainland.  Madeline Hsu analyzed how the Aid Refugee Chinese Intellectuals, ostensibly an NGO yet funded by the State Department, politicized refugees by transferring Chinese intellectuals in Hong Kong to Taiwan in support of Chiang Kai-Shek’s efforts to retake the mainland. Finally, Dominic Yang (UBC), one of the new IHS fellows next year, demonstrated that the Rennie’s Mill Community, a refugee community in Hong Kong, was not only a product of the Cold War but also a reflection of British benign neglect to the hardship of refugees.

In the second session, “The Politics of Cultural Production,” the panelists examined the ways that Cold War politics imprinted itself upon literature, film, and literary criticism.  Poshek Fu (U. Illinoia, Urbana-Champaign) analyzed Hong Kong film culture and argued that the “Mandarization” of Hong Kong cinema has to understood within the context of Cold War politics in Asia: as a battleground of the global competition between the U.S. and China in winning over the Chinese diaspora. Fu’s paper was read by Michelle I-hsiao Chen, Harrington Graduate Fellow in UT Austin’s Department of Asian Studies. Ping-hui Liao (UC San Diego) juxtaposed the works of two Chinese authors, Eileen Chang and Chen Ying-chen, to analyze their responses to Chinese Communism and American Neocolonialism. Chih-ming Wang (Academia Sinica) analyzed the works of Yan Yuanshu in order to explore how literary criticism reflected the ideological struggle of Cold War Taiwan.

“Propaganda and Discourse” was the third session.  During this session, the panelists presented fresh ideas on how to examine the press and literature. In his discussion of leftist newspapers published in Hong Kong and their reporting of the anti-colonial riots in 1952 and 1967, Chi-kwan Mark (U. London) argued that Hong Kong was a contested space of Cold War rhetoric that was constantly redefined. Shuang Shen (Penn State U.) located Cold War discourse within Chinese literature, complicating the notion of the Cold War in the Pacific by arguing that refugee literature reveals intricate intra-Asian connections.  Finally, Xiaojue Wang (U Pennsylvania) broadened the panel’s discussion by analyzing the rise of modern Chinese literature in the mid-twentieth century as an contested site during the Cold War.

Finally, in the last panel of the conference, “Negotiating Nonalignment during the Cold War: Hong Kong,” the panelists challenged current scholarship by placing Hong Kong in the center of Cold War dynamics.  Peter Hamilton (PhD Candidate, UT) focused on Pop Gingle, an American veteran and entrepreneur who moved to Hong Kong in 1937 and successfully established a business in the British colony and revealed a vast Pacific network in Asia.  Simon Shen (Chinese U of Hong Kong) examined the 1967 riot in Hong Kong, arguing that the riot needed to be examined in the international Cold War context that involved connections among China, Britain, the Soviet Union and the United States. Finally, Hon-Ming Yip (Chinese U of Hong Kong) used the 1940s Chinese Democratic Movement in Hong Kong to argue for the importance of Hong Kong as a node of Cold War politics.

The conference was an overwhelming success.  One of the participants, Shuang Shen, commented that “Without exaggeration, this was the conference from which I have learned the most.  The circulation of full-length papers ahead of time really gave me a chance to read and think about the other participants’ work while also forcing me to conceptualize more rigorously my own project.”